ANKENY, Iowa---For 16 years Joe Hayes ministered to pastors and church members throughout the state of Iowa, leading them in making disciples of Christ. 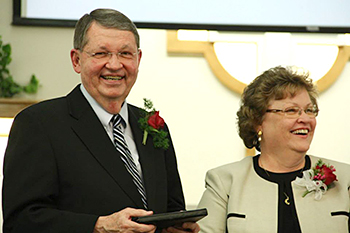 ANKENY, Iowa—For 16 years Joe Hayes ministered to pastors and church members throughout the state of Iowa, leading them in making disciples of Christ. On April 15 those same people said farewell as he retired from the position of state representative of the Iowa Association of Regular Baptist Churches.

Joe has served his entire adult life as a pastor. He entered Bob Jones University in the 1960s as a premed major. But God used his personal study of Romans 10:9–17 to call him to ministry. “How shall they hear without a preacher?” he read in verse 14. Joe began ministering in 1968 after graduating from Bob Jones University and served in pastoral ministry for the next 46 years.

“Bittersweet might be the word that comes to mind on such occasions as retirement,” David Strope said to Joe on the evening of his retirement banquet. Strope has been Joe’s pastor for the past 15 years at Ankeny (Iowa) Baptist Church and is chairman of the IARBC Council of Ten. “Bitter in that God introduced into your lives disease that altered plans and lowered aspirations; sweet when the blessed hand of God is reviewed over the course of 46 years of pastoral ministry.”

When Joe was diagnosed with Parkinson’s disease in November 2013, his wife, Marty, helped him physically, encouraged him, and assisted him as he prepared for ministries in the fellowship’s 100 churches.

Strope says Marty has “been the constant presence of God Himself in Joe’s life” through her own ministry of encouraging, praying, and serving. And when ministering to others, “she was often able to water gospel seed by her gracious, winsome spirit,” says the IARBC. Strope told her, “Your love for Christ has been seen in your faithful witness, your concern for your family, your church family, and the people in your immediate neighborhood. In these later days you added study helper, chauffeur, and chief medical consultant to your list of duties.”

Both Joe and Marty, Strope says, “have modeled for many generally and me particularly what an undershepherd of Christ should be.”

Throughout his ministry, Joe’s joy has been to see the gospel of Jesus Christ transform the lives of sinners. In the last few years, he renewed the IARBC’s focus on making disciples. He says, “The biggest problem in our churches is our weakness in intentional disciple making (evangelism and discipleship). The issue is not shrinking communities, but churches that lose their fervor for making disciples.”

Altoona (Iowa) Regular Baptist Church hosted the catered retirement banquet with a service following. The event was the final portion of the IARBC’s 79th Annual Conference, which had begun on April 14. Guests presented the couple with a pearl necklace for Marty, a fishing rod and spooled reel, a Nexus 7 tablet, a plaque, a memory book of cards and letters, flowers, and financial gifts.

In response to the encouraging words and generous gifts, Joe says, “If any of the nice things that you said about us turn out to be gold, silver, or precious stone (1 Corinthians 3:12), it is not because of us but because of God’s grace to us through Himself, His Word, and other people, including you, who have so  graciously impacted us by your example, instruction, and encouragement.”

Tim and Sandy Capon are now “state representative and first lady,” as Joe calls them, after a unanimous vote at a business session in March.

Joe says it has been a privilege to minister as state representative. He says, “Thank you to each of you who have prayed, planned, prepared, promoted, participated in, and provided financially for any of our fellowship ministries, not only in the past 16 years, but the last 79 years!”

Posted in Ministry Highlights, Network News on May 5, 2014.