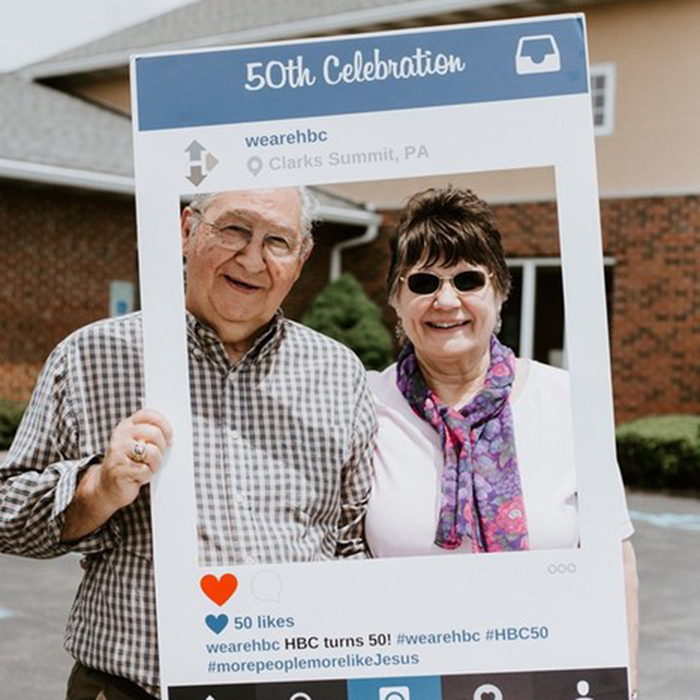 The previous day, the congregation enjoyed a block party on the church’s grounds, with s’mores, games, and an ice cream truck. The church continued the outdoor fun on Monday, May 27, by participating in its community’s Memorial Day parade. Members of the church walked alongside a float that looked like a birthday caked and handed out Frisbees advertising the church’s sports camp for kids.

When the church began in 1969, its members met at Clarks Summit University, says charter member David McClain. He and about 50 other people had moved to the area to work at the university—he as a librarian—and started the church after meeting regularly for worship and preaching services with the university’s chaplain. In 1973 the church broke ground to construct its own building near the university.

McClain and his wife, Janet, returned to Clarks Summit from their home in Xenia, Ohio, to celebrate the anniversary. “The highlight for us was to visit with our friends and to rejoice in the blessing that this church has been to individuals and community in Northeastern Pennsylvania,” he says.

Glenn Amos has been pastor of Heritage Baptist Church since 2011. He and his wife, Jane, had been members since 1994. Looking toward the future, the church is actively seeking to better serve its community. Amos says, “We’ve challenged ourselves with the question, ‘If Heritage Baptist Church ceased to exist, would people notice?’ We are looking at ways in which we can contribute and make a difference.” A church, he says, should be “an active part of the community, sharing the love of God with everyone they can.”