Those attending the Fellowship of Missions 45th Annual CEO Retreat and Conference enjoyed a relaxed atmosphere; appreciated devotional messages by Dr. Hantz Bernard, director of Bibles International; and delighted in a personalized tour of the Gerald R. Ford Museum. 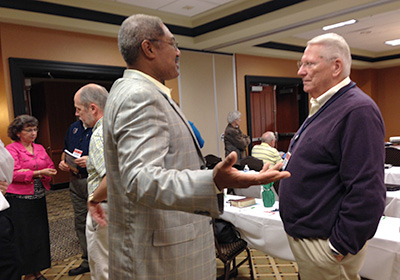 “This retreat is not a time for business (you now have me convinced),” Belt said to those registering, “but for informal fellowship, sharing testimonies, time in the Word and, yes, relaxation!”

Retreat attendees delighted in a personalized tour of the Gerald R. Ford Museum and appreciated devotional messages by Dr. Hantz Bernard, director of Bibles International, the translation division of Baptist Mid-Missions. Bernard was led to the Lord through Scripture memorization at age 15 by Baptist Mid-Missions missionaries in Haiti. He went on to earn a BA and two graduate degrees at Bob Jones University.

The conference portion, hosted by Continental Baptist Missions, was facilitated by Dr. Mark Vowels, director of missions at Bob Jones University. Belt says Vowels was “well qualified” to lead the group through the theme “Millennials: Why the Next Generation Will Change the Way We Do Missions.” Vowels has served as cross-cultural church planter, missionary administrator, missions team leader, and speaker in several countries, and is the international student liaison at Bob Jones University.

FOM is a missions organization consisting of 28 missions agencies representing more than 2,000 missionaries serving on all six continents. Gospel Literature Services, the GARBC’s international distribution arm of Regular Baptist Press materials, is one of its members. FOM provides opportunities for member agency heads and leaders to learn, keep abreast of global missions happenings, interact with each other through annual CEO retreats and conferences, and obtain information on current theological and methodological issues.

Next post Fellowship of Missions Holds Retreat and Conference