Discipleship was the focus of the Fundamental Baptist Fellowship Association's annual conference at the Kansas City Marriott Country Club Plaza. 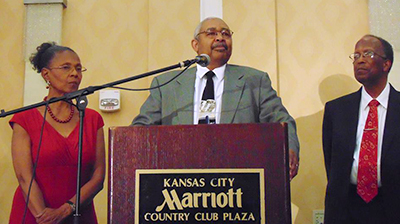 KANSAS CITY, Mo.—Discipleship was the focus of the Fundamental Baptist Fellowship Association’s annual conference at the Kansas City Marriott Country Club Plaza. “It was a great time of teaching that we can take back and apply at our churches as well as a time to renew old friendships and build new ones,” says Sonya Martinez.

Grace Baptist Church of Kansas City, pastored by Aaron Lavender, kicked off the conference July 12 with a worship service and picnic in a park. Then over the next four days, delegates of the association’s churches learned through general sessions and workshops how to disciple multiple generations, from millennials to seniors.

Discipleship is a process that takes time and requires us to take a stand for Christ, says Kenton Schiele, youth pastor at Grace Baptist Church.

Elaborating on that idea, Victor Clay, pastor of Dynamic Life Baptist Ministries in Kansas City, Kansas, says that “if we’re really going to travel the road of discipleship, we ought to be a movement.” Jesus, Clay says, began the ultimate movement of seeking and saving the lost and left it behind for us to continue. Seeking and saving are verbs that require action, he points out; many churches have action but with little purpose.

“Do you, your family, your church, or your association look like a movement, a monument, a morgue, or a mortuary?” Clay asks. “A movement has life. It has a cause. It draws others. It adds new members. It becomes an overwhelming flood and tide and it makes an impact and brings about change.”

Regular Baptist Ministries staff members John Murdoch and Alan Wilson were on hand at booths to introduce their ministries and create partnerships. Murdoch was director of Regular Baptist Chaplaincy Ministries at the time of the conference (he has since handed over the reins to Manning Brown), and Wilson is regional manager representing Regular Baptist Press. Chris Hindal, director of GARBC International Ministries, and Michael Nolan, director of Baptist Builders Club, also attended with the goal of growing relationships.

The Roots of the FBFA

The GARBC has a unique and long history with the FBFA. But it starts not with the desire to form partnerships but with distinct disunity.

In 1959, the GARBC recognized the newly formed Bible Baptist Church in Decatur, Illinois, whose congregation was primarily African-American, as a Baptist church but subsequently denied it fellowship with the association. Instead the GARBC encouraged its pastor, Robert Hunter Sr., to form a separate association of black churches. “Pastor Bob was hurt by the denial but felt that since the leadership was not favorable to the request, he would not demand that it be honored,” says Rev. Richard Woodworth in Hunter’s autobiography, Don’t Ever Give Up (Regular Baptist Press, 2011).

“At a crucial time in America when there was an outcry for equality of life and the pursuit of happiness for all people, God was raising up black men of fundamental Bible persuasions,” Hunter writes. “As those men sought identification and fellowship with individuals and churches within existing fundamental, Bible-believing organizations, they were not well received or readily accepted.”

“These pastors and churches were steeped in the doctrine and position of the Regular Baptist movement,” says Kevin Bauder in his blog, In the Nick of Time. “In everything except race they were indistinguishable from the GARBC. Logically and biblically, the GARBC should have received their churches into its fellowship, modeling the oneness of the body of Christ at a time when American civilization badly needed such a demonstration.”

In 1962, Hunter and three other men (Dr. Walter L. Banks, Dr. Richard C. Mattox, and Dr. John C. Williams) founded the FBFA, with Hunter serving as its first national representative. While its member churches are predominantly African-American, the FBFA has, since its inception, desired to be racially integrated. “God never intended one group of people to take the gospel message just to its own people group,” Hunter says.

Today, of course, the GARBC welcomes black and multicultural churches into its fellowship; 11 of the FBFA’s 27 churches, including Grace Baptist Church, Bible Baptist Church, and Dynamic Life Baptist Ministries, associate concurrently with the GARBC.

In 1996, the GARBC offered a formal apology to the FBFA for refusing fellowship, to which the FBFA graciously responded with forgiveness. Four years later, the GARBC went a step further. It held a joint annual conference with the FBFA in Ames, Iowa, and introduced a resolution to “walk and work together as partners for mutual benefit to both associations, as equals.”

A Voice That Needs to Be Heard

Kevin Bauder, research professor of historical and systematic theology at Central Baptist Theological Seminary and Regular Baptist Press author, had the privilege of attending this year’s FBFA conference. “It was a treat to hear strongly doctrinal and expository preaching.” And theirs is a voice that “needs to be heard within American fundamentalism,” he says. While FBFA leaders can speak to the challenges of ministering in black communities, they “are also aware of larger racial situations within American society—indeed, more than one speaker alluded to them,” Bauder says. “The leadership of the FBFA is in a position to offer godly, biblical perspectives on those situations that one might not hear in a predominantly Anglo organization.”

The conference also included time for fun. A Scholarship Golf Tournament, a first for the association, took place on Wednesday at Hillcrest Golf Club. All entry fees went to the funding of scholarships that the FBFA offers. And some attendees enjoyed visits to the Negro League Baseball Museum, American Jazz Museum, and the interactive College Basketball Experience at the Sprint Center.

An evening banquet with Dr. Thomas White, president of Cedarville University, wrapped up the conference.

Conference organizers offered livestreaming each day, but those who were unable to attend online or on-site can still hear the audio recordings:

Next year’s conference will take place July 21–23 in Indianapolis. Preregistration is already available at a 15 percent discount. The first 300 people to pay registration fees in full will receive free tickets to the Creation Museum in Petersburg, Kentucky, on July 20.