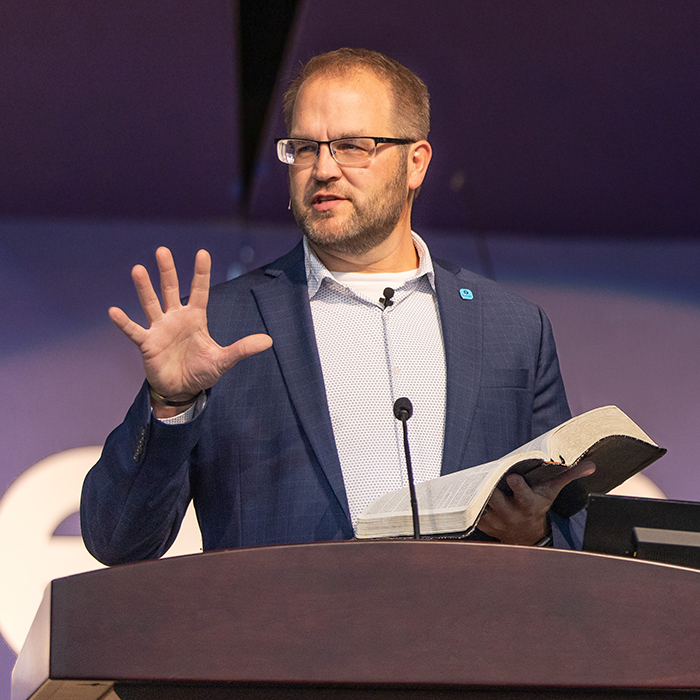 ANKENY, Iowa—Faith Baptist Bible College and Theological Seminary hosted its Refresh Conference Feb. 2–5. The four-day event for pastors and ministry leaders has been a staple of the institution for most of its 100 years and helped kick off the school’s centennial celebration. Despite the COVID-19 pandemic and its lingering effects, this year’s conference broke the record for most attendees, with ministries represented from 25 states and three countries.

The school held its first conference Feb. 22–25, 1945, when the event was called Bible Conference and the school was known as Omaha Bible Institute. The featured speakers that year were Dr. Paul W. Rood, former president of Biola University and the World’s Christian Fundamental Association, and Dr. W. B. Riley, an ardent antievolutionist of his time and the man who became known as “The Grand Old Man of Fundamentalism.” In the March 1945 edition of the school’s publication The Living Word, it was noted that pastors came from all parts of Nebraska, Kansas, Iowa, and Colorado to participate in the school’s first official Bible Conference “in spite of the blizzard which blanketed Omaha with 13 inches of snow on February 21.”

While there was no blizzard for the 2021 Refresh Conference, the weather did play a factor. Dr. Daniel Anderson (president of Appalachian Bible College and author of Biblical Slave Leadership) was scheduled to speak at the opening session on Feb. 2, but his flight to Des Moines was canceled due to bad weather on the East Coast. Dr. Patrick Odle (president of Baptist Mid-Missions) calmly and collectively switched his speaking time to fill Dr. Anderson’s place and delivered one of the finest messages of the week. On Thursday, another snowstorm hit central Iowa, bringing several inches of snow and heavy winds, which made travel treacherous in the region. About a dozen Faith students sacrificed their early morning sleep to help clear sidewalks for conference attendees.

The theme of this year’s Refresh Conference was “Faithfulness.” To help commemorate Faith’s 100 years as an institution, all of the general speakers were Faith graduates. General session speakers included Dr. Daniel Anderson, Dr. Douglas Brown, Dr. Tim Sigler, Dr. Kevin Bauder, Dr. Patrick Odle, Tim Capon, Dr. Brent Belford, Dr. Paul Hartog, and Dr. Jim Tillotson, who was granted honorary alumni status early in his tenure as president at Faith. Dr. Anderson’s message was a highlight of the conference as he presented Dr. Tillotson with a birthday cake in honor of the school’s 100 years.

Each day was filled with back-to-back general sessions in the morning, followed by workshops in the afternoon, and capped with an evening service. Special music was an uplifting part of the conference, featuring songs from a variety of Faith students and singing groups and from singer and songwriter Ben Everson, the featured musician for the week. Everson brought daily doses of encouragement through a selection of a cappella songs and, on Feb. 4, led an evening concert for attendees. Alumni receptions were held on two evenings following the general sessions and were well attended.

The Refresh Conference is designed to be an encouragement for pastors, ministry leaders, and their wives. Last year was especially challenging for churches across the country, but 76 years after the first Bible Conference, the purpose and effects remain joyfully similar:

“The spiritual blessings received were many, and it is trusted that both ministers and laymen went back to their charges with new enthusiasm and a greater love for the Lord and his precious Son. Opinion seemed to be unanimously in favor of similar conferences to be held once or more each year” (The Living Word, March 1945).