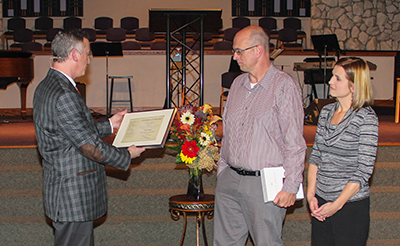 “Though a pastor’s ordination can be executed in a weekend, it takes a lifetime of obedience and preparation to arrive at this high calling of God,” says Jenifer Christiaanse of Emmanuel Baptist. “If an ordination were captured in slides like a missionary presentation,” she says, “the first slide would be of a tall 12-year-old at camp where God called Dave to himself and where Dave surrendered his heart and life to Christ.”

Rodgers grew up in a home with parents who did not know the Lord. “My parents would go to church occasionally,” he says,”but one of the biggest memories I have growing up was getting picked up in a van and taken to Vacation Bible School.” When VBS ended, he began attending the church that hosted the program, and eventually his parents began attending as well.

Although that church introduced Rodgers to Jesus, it was at a Christian camp where “God grabbed a hold of my heart. I do not remember the speaker or the sermon. I do remember being overwhelmed by the fact that I could not live the life God wanted me to live in my own strength.”

God put Rodgers on a path in life that provided him with friends and mentors who helped him grow in his relationship with Him. While in college, Rodgers accepted friends’ challenge to embark on a short-term missions trip to teach at Santiago Christian School in the Dominican Republic. He ended up teaching there for eight years. Later friends at Emmanuel Christian School, where he was a teacher, helped him confirm his call to ministry.

“My four years at Emmanuel Christian School solidified my love for the local church, allowed me to connect with the great church and school my wife attended—and helped me learn how to deal with a mercury fire,” Rodgers says.

Desiring to minister full-time, Rodgers knew he would need to continue his education. By then he was a married father of two. The encouragement of Philip De Courcy, then pastor of Emmanuel Baptist, aided his decision. Over lunch one day, De Courcy told Rodgers, “Either go to seminary or quit talking about it and continue ministering here.”

Rodgers attended Baptist Bible Seminary and then returned to Emmanuel Baptist Church as a pastoral intern. He became associate pastor in July 2012, serving in small groups, ministries to children and families, and Christian education. He is also on the board of Camp Patmos in Kelleys Island, Ohio. Camp is important to Rodgers, since that is where he found Christ at age 12. “I had many great experiences at camp as a child, which is why I send my children to camp.” He was even a camp counselor as a college student and currently speaks at camps.

Rodgers and his wife, Krista, a fellow teacher he met in the Dominican Republic, have three children, Joel, Josiah, and Jadyn.

Participating in the ordination service were Duke Crawford, pastor of Emmanuel Baptist Church; Dr. Dann Austin, professor at Baptist Bible Seminary while Dave was a student; and Philip De Courcy via video, who encouraged Dave to “lead, feed, intercede, and bleed.”

Rodgers says, “It is such a great privilege to not only show others the truth of God’s Word, but also to remind myself of it daily. We serve an amazing God.”