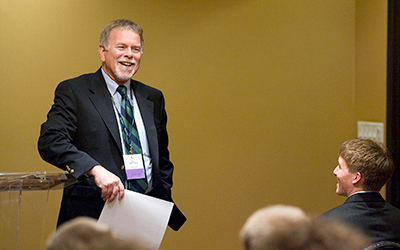 Dr. Lytle, who has a long and exemplary record of service, leadership, and ministry, will be the institution’s 10th president.

John Greening, chairman of the board of trustees and national representative of the GARBC, affirmed the decision in brief comments regarding the newly elected president. “Jim Lytle is prepared to retool BBC&S for the future with an allegiance to our values and mission, with full support of the board. He understands the extraordinary potential of a Biblical education in equipping learners to live and serve for eternity in the present.”

A graduate of Baptist Bible College (BS) and Baptist Bible Seminary (MDiv and ThM), Lytle earned his DMin degree from Trinity Evangelical Divinity School in Deerfield, Ill. He has served in Biblical higher education for over 30 years.

After serving as an assistant and associate professor for 13 years at BBC, Lytle was called to South Africa, where he and his wife, Diane, served as missionary church planters. While there, he led in establishing Bethany Baptist Church, beginning with a home Bible study and transitioning to national leadership.

He was also involved in Baptist Bible College of KwaZulu-Natal, where he served as president from 1995 to 2006. He led the school to achieve degree-granting status, developed the school’s library, and taught courses in Bible, theology, and pastoral ministry.

Upon returning to BBC in 2007, Dr. Lytle began serving as vice president for college and graduate academics and professor of Bible and theology. He was appointed provost in 2008. In this role he developed and implemented a six-year strategic plan and has been instrumental in preparing the institution for university status through interactions with legislators and the Pennsylvania Department of Education. He also led in the development of several new majors and degrees and the reorganization of the Office for Student Development.

He served as executive vice president throughout the national presidential search that began in May 2014. During this time he continued to fulfill responsibilities as academic vice president and provost.

Dr. Lytle’s passion for higher education is evident in the love and faithful service he has demonstrated in South Africa and at Baptist Bible College and Seminary.

Lytle has published several study guides and articles on studying the Bible and Christian living. He coauthored Effective Bible Study and The Christian Life with his wife, Diane, for Regular Baptist Press adult Sunday School curriculum.

“When I came to BBC&S as a student in 1973, I never imagined that I would be taking on this role. My plan was to take one year of Bible courses and go on with my life, but BBC&S really got into my blood,” said Lytle.

“It’s challenging in higher education today, but with our exceptional faculty and staff, we can build our resident and online enrollment by using an increased array of programs and degrees that will fulfill our mission better than we have ever been able to do before.

“This world needs a lot more graduates like ours in a variety of ministries and careers who understand God’s Word, care about people, and are prepared for lives of significant service for Jesus Christ. These are exciting days to lead a school like BBC&S.”

The trustees’ unanimous approval of Dr. Lytle followed a recommendation by the presidential search committee on Oct. 31. Lytle takes over for outgoing President Jim Jeffery, who announced his resignation from BBC&S in May to pursue a return to pastoral ministry. Jeffery will continue to serve the school in the role of chancellor when Lytle assumes the president’s role in January 2015.

Details regarding Dr. Lytle’s installation will be announced at a later time.