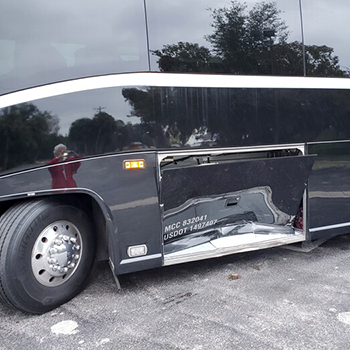 SEBRING, Fla.—Members and friends of Maranatha Baptist Church are praising God for His protection after a delightful trip turned disastrous.

Sixteen members and friends from Maranatha Baptist Church took a seven-day road trip with 53 people from a Baptist church in New Port Richey.

Traveling 2,200 miles by charter bus, the group visited several locations, including an aquarium in Kentucky and the East Tennessee History Center in Knoxville. The group also enjoyed a sightseeing cruise on the Ohio River and prepaid dinners.

The trip had been organized by David Crandall, pastor of senior adults at the New Port Richey church and former director of Regular Baptist Press International (formerly Gospel Literature Services).

Homeward bound, the group had just entered the state of Florida in their bus when the driver noticed in his sideview mirror a car speeding out of control in the passing lane.

The car was “crossing two lanes and heading for our tour bus,” says Betty Hendsbee.

The bus driver steered the bus to the side of the road. The car ended up spinning out of control and hitting the luggage door on the driver’s side of the bus, directly behind the left front tire.

“This once-in-a-lifetime excursion could have ended in tragedy except for the grace of God,” Betty says. Thankfully, the bus passengers and driver were not injured.

After the incident, David Crandall prayed with the group, praising God for His protection and for the competency of the bus driver, who remained calm, cool, and collected.