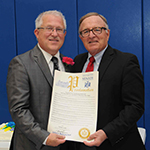 ELBRIDGE, N.Y.—First Baptist Church of Memphis, New York, celebrated 200 years of ministry. Eighteen members began the church under the leadership of Elder Barnes in the wilderness of central New York in 1815. At that time, the church was called Second Baptist Church in Christ of Camillus, as Memphis didn’t exist when it was founded. Two hundred years later, that work continues with basically the same doctrinal statement as when it was founded.

On Sept. 13 a celebration led over 250 members and friends to look both back and ahead. Pastor Art George, the current and only surviving pastor of the church, preached a message directed to the church of the future, based on the year’s verses, Hebrews 12:1 and 2.

In keeping with the forward-looking theme, two time capsules were placed to be opened in 50 and 100 years respectively. Arza Brown, a missionary from Maui, spoke in the afternoon, challenging members to consider their faithfulness to God and His church today.

A letter was read from President Barack Obama congratulating the church on its bicentennial. In addition, New York State Senator John DeFrancisco presented a state proclamation in celebration of the church’s 200 years. He then thanked the church for its part in keeping God in our society in light of the current demise of our present culture and trends.

The bicentennial theme was carried into the weekend of September 26 and 27, with speaker Dr. Charles Dear presenting a history of Baptists in America. To close the year, a December banquet will look back on the many blessings of God.

First Baptist has seen great changes since the collapse of its facility in 2011 due to excessive snow. The church has since moved four miles to a more advantageous location and has grown significantly, which Pastor George attributes to the church’s continued focus on preaching the Word.