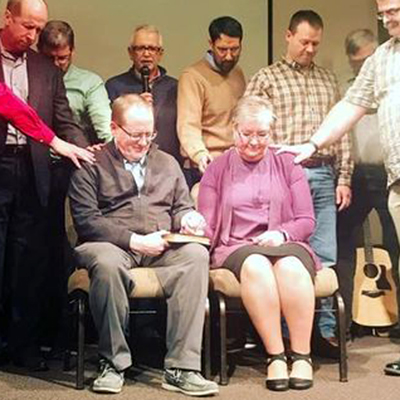 WISCONSIN RAPIDS, Wis.—Calvary Baptist Church is celebrating the calling of Jack Austin as pastor. The church installed him to his new role Sunday, March 25. He had previously served at the church as associate pastor since 2002.

During the installation service, Rev. Jon Jenks gave the charge to the congregation. Jenks is a former pastor of Calvary Baptist and is now state representative of the Wisconsin Association of Regular Baptist Churches and director of intentional discipleship ministries for Baptist Church Planters. Dr. Jim Lytle, president of Clarks Summit University, and his wife, Diane, gave charges to Jack and his wife, Sue. And Pastor Andy Austin, Jack and Sue’s son, spoke to the congregation by video.

Calvary Baptist says, “Our church family has been blessed by [Jack and Sue’s] many years of service already at Calvary and we look forward to the future of Calvary Baptist with Pastor Jack and Sue as lead pastor and wife!”