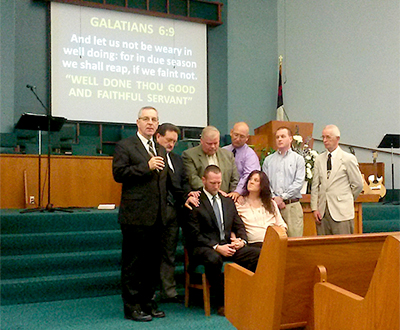 NEW PORT RICHEY, Fla.—Sun Coast Baptist Church ordained Bryan Goebert, pastor of the church since 2005. An ordination council met on Nov. 29, with Mark Smith, director of Bible Tracts, Inc., serving as chair. Smith was pastor of Sun Coast Baptist from 2000 to 2003. The congregation had the privilege of hearing him speak at the ordination service on Nov. 30.

Goebert grew up in a pastor’s home, but never intended to follow in his father’s footsteps. After graduating from high school, he attended Clearwater Christian College. Halfway through his sophomore year, he sensed God directing him toward full-time ministry and changed his major from biology to Bible.

He began working with the youth ministry at Sun Coast Baptist Church part-time in the fall of 2002 while finishing his senior year of college. In May 2003, after he graduated with a BA in Bible, Sun Coast Baptist called him to serve full-time as youth pastor. He was licensed by the church in December 2004 and was called to serve as senior pastor in September 2005.