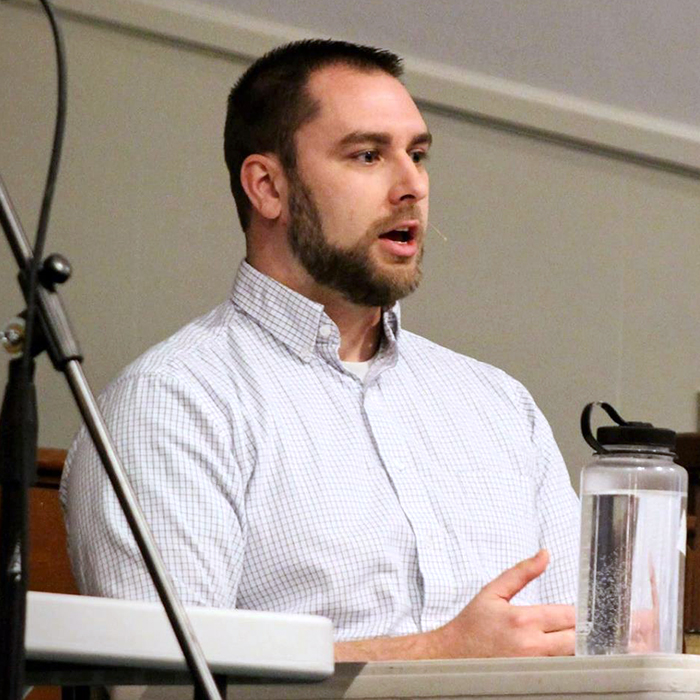 On the preceding Friday, 30 people from 18 churches graciously gave of their time to examine Eric’s understanding of the Bible and theological matters and confirm his qualifications for ministry. The council was moderated by Greg Linscott, pastor of Brown Street. Pastor Dale Williams of Emmanuel Baptist Church of Warrenville, Naperville, Illinois, served as clerk. “Eric fielded over 150 questions over the course of three hours,” Williams says. “His skill and grace under pressure was admirable and spoke to his spiritual character and love for the Scriptures.”

Eric and his wife, Kim, are both graduates of Bob Jones University. Eric came back to Alton in 2015, when Brown Street extended a call for him to serve in its youth ministry. It was a special blessing for everyone to have Eric come to serve in the church he had been raised in, and whose family has been a part of Brown Street for five generations. His responsibilities have broadened since to include music, various administrative and oversight roles, and even counseling. “Eric has been invaluable to this ministry in countless ways,” Linscott says. “The experience and perspective he brings increases our efficiency in serving the needs of this local body.”

Pastor Mike Myers of Faith Baptist Church, Winfield, Illinois, delivered the charge to the congregation. Myers served as youth pastor at Brown Street for 13 years, which included Eric’s teenage years. “The two words I would use to describe Eric would be ‘humble servant,’” he told the congregation. Pastor Jeff Miller of Agnew Road Baptist Church, Greenville, South Carolina, where Eric was a member for six years, agrees. “Many college students get involved in studies, and their church life becomes an afterthought,” Miller said while delivering the charge to the candidate. “That was never true of Eric. He always fulfilled his responsibilities thoroughly and was an active and visible member of the body during his time with us.”

In addition to the two messages, the Sunday ordination service featured a reading of Brown Street’s church covenant, as well as vows exchanged between the congregation and its newly ordained pastor. Eric testified to his willingness “to devote (himself) to prayer, the ministry of the Word, and the shepherding of God’s flock,” while the congregation committed themselves to “love him and pray for him in his ministry and work together with him humbly and cheerfully.” A reception closed out the day, as the congregation was reminded that developing the next generation of pastors and leaders remains a vital priority.