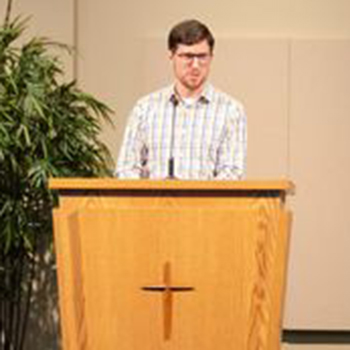 Thomas moved to Minnesota from Queens, New York, where he had served as teaching and administrative pastor of Faith Baptist Church in Corona for seven years. Before that he was an undergraduate Bible college instructor and a guidance counselor while serving in a variety of pastoral support roles, including children’s and inner-city ministries. He recently received an MDiv from Baptist Bible Seminary.

Speaking at the installation service July 11 was Steve Anderson, field director of Baptist World Mission. His message to the church and to  Thomas was titled “Characteristics of a Godly Man.”

Other leaders also contributed to the service by video, including Clare Jewell, director of Generate; Ken Pyne, a chaplain at Baptist Bible Seminary; and Mike Hess, GARBC national representative. In his remarks, Mike said, “I want to encourage you as a church . . . to grow and change into the image of Christ.”

The Overmiller family provided special music. Thomas and his wife, Sarah, have six children, ages 2 to 13.

Brookdale Baptist is thankful for God’s provision of a new pastor and prays “that the church will make a vibrant, fruitful impact for the gospel, helping people take the next steps in following Christ throughout the Fargo/Moorhead community.”