What do you do when things don’t go as planned? More than 350 Baptist Mid-Missions missionaries, staff, and other guests delved into this topic at BMM's 2017 Annual Conference held at First Baptist Church of Elyria, Ohio. 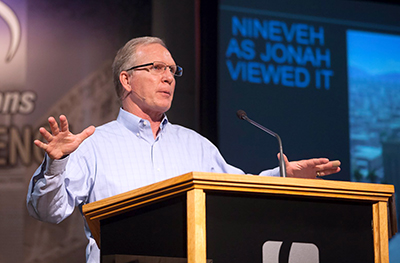 What do you do when things don’t go as planned? More than 350 Baptist Mid-Missions missionaries, staff, and other guests delved into this topic July 10–13 at BMM’s 2017 Annual Conference held at First Baptist Church of Elyria, Ohio. Central to the conference were messages by keynote speaker Dr. Daniel Davey, president of Virginia Beach Theological Seminary. Dr. Davey spoke on the book of Jonah, bringing reminders of God’s surprising mercy and offering challenges to let God be our king.

The four-day conference is an annual reunion for the Baptist Mid-Missions missionary family. Rest and spiritual refreshment rank highest as our goals as we offer missionaries a break from the hectic pace of ministry. As part of this member care goal, we invited Pastor Jerry Lancaster and his wife, Joy, to hold plenary sessions on “Don’t build your ministry and forget to build your family.” Pastor Lancaster’s messages encouraged us to be intentional about demonstrating love and building up our marriages and families.

Each morning, missionaries chose from five workshops on subjects such as “Building a cohesive team,” “Dominating discouragement,” and “Understanding a Millennial’s view of truth and tolerance.” Workshops offered helpful tools not only to enhance ministry but also to build up missionaries personally. Mealtimes and planned outings became opportunities to decompress and interact with BMM staff and other missionaries. BMM President Vernon Rosenau refers to this as “cross-pollination,” where missionaries serving on every continent can share common ground and exchange ideas on what works and doesn’t work in their own ministries. They also share the joy of simply getting to know other brothers and sisters in Christ.

Missionary Kids (MKs) are fully part of this cross-pollination and enrichment, thanks to a large crew of volunteers from First Baptist Church of Elyria, Faith Baptist Bible College (Noah and Nikki Kephart and Lance and Carrie Augsburger), and others who staffed the nursery and held sessions and outings for children and teens. Special thanks to Pastor Dan Parker, who led worship music, and a team from Faith Baptist Bible College, which provided music throughout the week. Two team members were Ben Stilwell and Jennifer Swedberg, who are BMM MKs from Peru and Brazil.

Special events during every conference include the service pin awards in which longevity in missionary service is honored. Missionaries and home office staff are recognized, starting at 20 years of service. This year Brazil missionaries John and Karen Swedberg received 50-year pins. Another special event is the William C. Haas Lifetime Service Award ceremony. We honored Russell and Judy Gordon for their four decades of church planting in Brazil. The Gordons’ exemplary, sold-out service resulted in people saved and thriving churches planted across northeast Brazil. Click here to view the Gordons’ life story video.

Every Annual Conference ends with the Inner Circle, a BMM tradition dating back to our earlier years. Missionaries who will return to their fields of service before the next conference gather in a circle, surrounded by the remaining attendees. We commit them by prayer to God’s blessing on their upcoming term of service. It’s our hope that they all leave more rested and refreshed to better accomplish what God will call them to.