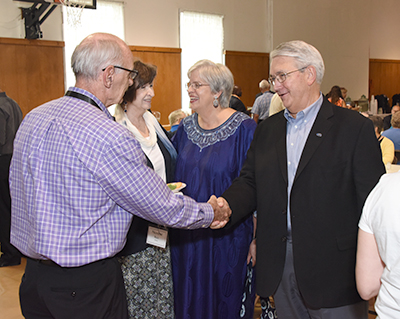 During Baptist Mid-Missions’ Annual Conference July 4–7, 2016, more than 550 missionaries and special guests filled the auditorium of First Baptist Church of Elyria, Ohio, to witness two presidential events. On July 5, we paid tribute to President Emeritus Gary Anderson and his wife, Barbara, bestowing on them our highest honor, the William C. Haas Lifetime Service Award. And on July 6, we formally installed Dr. Vernon Rosenau as our new president.

Dr. Jim Tillotson (president of Faith Baptist Bible College and Theological Seminary) was keynote speaker. It was a joy to have him preach messages on behalf of Dr. Anderson, who spoke at Dr. Tillotson’s presidential installation in September 2015; and on behalf of Dr. Rosenau, who received his honorary doctorate from FBBC&TS in May 2016.

During his leadership with BMM, Dr. Gary Anderson shunned the spotlight, preferring to champion our missionaries instead. On Tuesday night of our conference, it was time to give honor to whom honor is due. Dr. Howard Wilburn (BMM Council) took the podium, stating, “To say that we, the governors, appreciate Dr. Anderson is an understatement. Because of his 30 years of leadership, Baptist Mid-Missions is a better mission agency, and the worldwide church is strengthened.” He cited Dr. Anderson’s deep compassion for BMM missionaries and his heart profoundly concerned for the lost as two of the qualities that earned him the Haas award, which is given to those demonstrating exceptional surrender and willingness to be consumed for the sake of the gospel.

Dr. Wilburn’s remarks were followed by a touching tribute from Tim Anderson, son of Gary and Barbara Anderson. Speaking on behalf of his siblings Stephen and Joy, he said, “Each of us is striving to be like you, because you’ve shown us how to be like Christ.” Tim also praised his mother, Barbara, who led each of her children to the Lord, modeled enthusiasm for ministry, and taught them about every mission field their father visited during the weeks he spent away from the family. 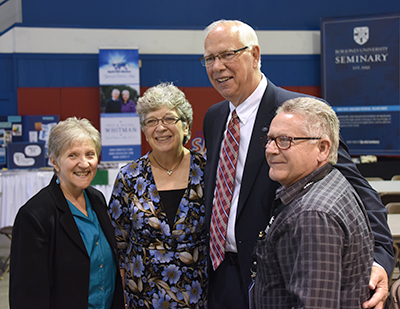 Dr. Anderson echoed Tim’s sentiments during his turn to speak: “Without those with whom God surrounded me, whatever success I’ve enjoyed would have never, ever been possible; and that starts with Barbara. . . . Our home was stable, spiritually grounded, ministry oriented—a tribute to Barbara’s influence as much or more than mine.” On behalf of BMM’s Council, Rev. Ed Sears and Mrs. Kim Kerr presented Barb with a large gift bag in appreciation for her invaluable support of Baptist Mid-Missions.

The following night, July 6, Dr. Anderson commended the Council and the presidential search committee that tirelessly worked to find not just the best available candidate but the man of God’s choosing: Dr. Vernon Rosenau. Addressing the new president, Dr. Anderson said, “God has blessed Baptist Mid-Missions by giving you to us, and I pledge to be your champion.” As he passed the baton of leadership, he told how he had been counseled early on that he would face the fiercest spiritual battles he’d ever seen, because BMM missionaries would be reclaiming territory that’s been under the uncontested control of Satan for generations. Dr. Anderson spoke on the promises found in the Lord’s prayer: “In those nights when you and God, neither one of you are able to sleep, [I pray] that you will understand with a fullness that God Himself will reveal to you, that He is your Father, and that all the promises of that model prayer . . . all of that is yours, because He is your heavenly Father.” He followed, “You’ve been given by God the privilege to help shape our hearts as we go forward. I’m praying that God will give you the voice that will call us all to a single goal of honoring God, doing His will, and accomplishing what’s not in our hearts but in His heart to do.”

In choosing speakers for his installation service, Dr. Rosenau wanted two people: his mentor (Dr. Anderson) and the one Dr. Rosenau mentored during his years as a missionary in Central African Republic (CAR), Dr. René Malipou. Using Ephesians 5:27 as his text, Dr. Malipou spoke on “What kind of church does Baptist Mid-Missions want to present to Jesus Christ?” He challenged our missionary family to follow their new leader, just as Moses challenged the people to follow Joshua. He encouraged Dr. Rosenau with “God has raised you up. Don’t be afraid; you have an account to give to God alone. You are now the pilot, bringing everyone together on the same ship in the ocean. . . . People from all over will want you to go their way, but look straight ahead.”

It has been deeply satisfying for Dr. Rosenau to, in his own words, “see René climb on my shoulders and reach higher than I ever could.” Today, Dr. Malipou directs the first BMM-affiliated graduate-level theological seminary in CAR. He is the first national in BMM history to give the charge to an incoming president—gratifying evidence of God at work through Baptist Mid-Missions, raising up well-trained national leaders who carry on missions in their own country. In his presidency, Dr. Rosenau wants nothing more than to see God continue that work around the world.