Baptist Church Planters officially installed Stephen P. Little as president in a celebration in Cleveland on Tuesday, Aug. 26. On that evening, outgoing president Dr. David C. Little passed the baton of leadership to his brother Stephen. 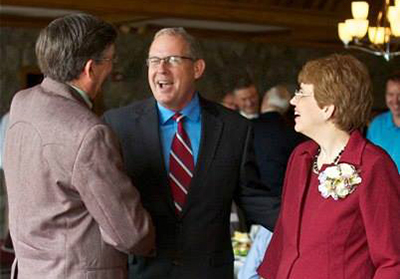 Chairman Craig Johnson and Search Committee Chairman Dan Adams began the inaugural events by sharing how the Lord led the council to extend the invitation to Steve, and Steve shared the Lord’s work in his and Becky’s hearts to bring them to BCP.

God has uniquely prepared Steve to serve as president through many years of church-planting ministry in Brazil and the U.S. In addition, he has served with BCP since 1994 and was a BCP council member for 12 consecutive years.

David Little served with BCP for 17 years. He has now “retired” to a position on the pastoral staff at First Baptist Church, Elyria, Ohio. Following the installation of Steve, Dr. Gary Anderson, president of Baptist Mid-Missions, focused guests’ attention on Dave’s past faithful and visionary leadership. A slide presentation featured highlights from his ministry, and five individuals talked about about their specific ministry journeys with Dave and his wife, Kathy. Each shared that the years of service under Dave’s leadership and the friendships with Dave and Kathy were special blessings they would treasure. The council and administration presented to the Littles expressions of appreciation, and Dave and Kathy shared their heartfelt thanks to the Lord and farewells to the BCP family.

Guests were reminded of the godly heritage of the Little family when it was noted that Aug. 26 was the seventh anniversary of the Homegoing of the Little brothers’ father, Charles, who served faithfully as a church planter. Continuing that legacy, Dave made BCP a respected and viable mission agency. BCP is confident that God will use Steve to further the work of meeting America’s greatest need of fundamental churches where the gospel is proclaimed.