Controversy over Islam is increasing both within American religion and among American political candidates. How are Christians, and especially Baptists, supposed to think about Muslims? 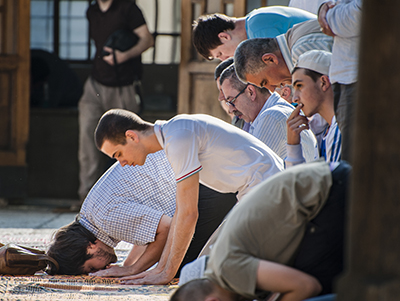 Controversy over Islam is increasing both within American religion and among American political candidates. On the one hand, a Wheaton College professor was recently disciplined for suggesting that Christians and Muslims really worship the same God. This action has sparked a robust dispute among evangelicals. On the other hand, some office seekers have demanded a moratorium on Muslim immigration, and many voters have cheered the proposal. So how are Christians, and especially Baptists, supposed to think about Muslims?

Not every idol is made of wood or stone. Most idols are fashioned in the mind. For its idol, Islam has fashioned an idol for which Jesus was a secondary prophet, but not God the Son. The idol that Muslims worship sent Mohammed to be its chief prophet, and salvation depends upon acknowledging and obeying them both. This idol is decidedly not the God of Christianity.

In short, Christians and Muslims share no common deity. What they do share is a common image of God resulting in a shared human nature. Islam may not lead Muslims to recognize this commonality in Christians, but Christians should always recognize it in Muslims. Because of their possession of this image, Muslims should always be treated with the same decency and dignity that are rightly accorded to all of God’s image-bearers—all the more so because Christians recognize in Muslims fellow-sinners for whom Christ died.

Islam belongs to an entirely different class of religions than Biblical Christianity. Christians must never surrender that point. At the same time, their attitude toward Muslims must be characterized by tolerance, charity, and compassion. At one level, this attitude requires the heartfelt attempt to bring Muslims to Christ for the forgiveness of sins. At another level, it means that Christians should be the first in line to protect the rights—including the religious rights—of Muslims.

Most religions have extremists and adherents who are willing to use violence in the name of their faith. From a Muslim point of view, the armed Mormons who have occupied the Malheur Wildlife Refuge in Oregon probably count as Christians. Certainly the Magisterial Reformers relied upon the fear of the sword to enforce conformity to their religious views. It took an odd group like the Quakers to practice religious tolerance, and an odder group—the Baptists—to insist upon complete religious freedom.

Some Muslims commit indecencies in the name of their religion. So do some Christians. It is right that malefactors, whether Christian, Muslim, or Pastafarian, be prosecuted. What is not right is that adherents who do not commit indecencies should be oppressed simply for adhering to their faith. In fact, no religious test can rightly be applied at any level of civil society: not for immigration, not for citizenship, not for civil service, not for public office.

Those candidates who have suggested some sort of ban applying only to Muslim immigration are wrong. More than that, they are dangerous. To single out one religion for suppression is a dangerous precedent, whatever that religion might be. Any measures that can be used against Muslims today will almost certainly be used against Christians in the not-too-distant future.

Granted, Muslim extremists pose a special problem. Not many wars are being started by radical organizations of Norwegian Lutherans. Even if they were, however, the solution would not involve the suppression of Lutherans. It would involve action against the organizations and individuals who were actually starting the wars.