World News May 1: As many as 100 high school students walked out of a national journalism conference after Dan Savage, an anti-bullying speaker, began attacking the Bible. Read more about this and other world news. 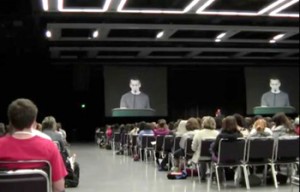 As many as 100 high school students walked out of a national journalism conference after Dan Savage, an anti-bullying speaker, began cursing, attacked the Bible, and reportedly called those who refused to listen to his rant a filthy name, reports Fox News. Savage’s campaign has reached more than 40 million viewers, with contributors including President Obama and Hollywood stars. Savage was supposed to be delivering a speech about anti-bullying at the National High School Journalism Conference sponsored by the Journalism Education Association and the National Scholastic Press Association. But it turned into an episode of Christian-bashing. Rick Tuttle, the journalism advisor for Sutter Union High School in California, was among several thousand people in the audience. He said they thought the speech was one thing, but it turned into something else. “I thought this would be about anti-bullying,” Tuttle told Fox news. “It turned into a pointed attack on Christian beliefs.” Tuttle said a number of his students were offended by Savage’s remarks, and some decided to leave the auditorium. “It felt hostile as we were sitting in the audience—especially towards Christians who espouse beliefs that he was literally taking on.” Tuttle said the speech was laced with vulgarities and “sexual innuendo not appropriate for this age group.” At one point, he said Savage told the teenagers about how good his partner looked in a Speedo. The conservative website CitizenLink was the first to report about the controversy. They interviewed a 17-year-old girl student who walked out of the auditorium. “The first thing he told the audience was, ‘I hope you’re all using birth control,’” she told CitizenLink. “He said there are people using the Bible as an excuse for gay bullying, because it says in Leviticus and Romans that being gay is wrong. Right after that, he said we can ignore all the [expletive deleted] in the Bible.” As the teenagers were walking out, Tuttle said that Savage heckled them and called them a dirty name. “You can tell the Bible guys in the hall they can come back now because I’m done beating up the Bible,” Savage said as other students hollered and cheered.