Much At Stake as Supreme Court Scrutinizes Obamacare

World News March 27: The U.S. Supreme Court has begun hearing arguments in the lawsuit challenging the constitutionality of the Patient Protection and Affordable Care Act, also known as Obamacare. Read more about this and other world news. 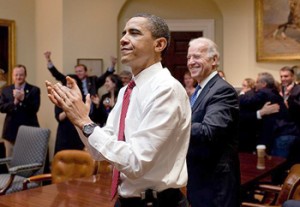 The U.S. Supreme Court has begun on Monday hearing arguments in NFIB vs. Sebelius, the cardinal lawsuit challenging the constitutionality of the Patient Protection and Affordable Care Act, also known as ObamaCare. As an indication of its importance, the Justices have allotted six hours for arguments—the most time granted in any case since Brown vs. Board of Education. “Nothing less than the future of the nation is at stake: our ideals, our freedoms and the ability of our small businesses to create jobs and grow the economy,” remarked Karen Harned, executive director of the National Federation of Independent Business Small Business Legal Center, on Fox News. Continued Harned, “It is not hyperbole to state that this may be the most important case the Court will hear this century.” Five of the freedoms at stake, says Harned, are (1) the American ideal of freedom, the freedom to purchase whatever product we want with our own money, the right to own and operate a small business, the power to decide what is medically best for our families and businesses, and the economic future of this country. “The stage is set for this case to make history,” says Harned. “Either the nation morphs into a culture of dependency, where Americans relinquish their freedoms to an all-powerful government, or we stand for what the Founders sought to preserve: our individual liberties and freedoms.” Just 36 percent of Americans back Obamacare, which is opposed by pro-life groups because it funds abortions and prompts rationing concerns, reports LifeNews.com. Obamacare also doesn’t just discourage entrance into the medical profession; it encourages those who are already practicing to leave it, reports The Foundry. A survey states that “health care reform is motivating doctors to change their retirement timeline.” In fact, 43 percent of respondents said they are considering retiring within the next five years as a result of the law. A surgeon from Michigan wrote that under Obamacare, “We will be moving further away from humanity-based health care and more towards the patient as a commodity. This was not the way my father practiced—nor will I. Winding down to retire early.”

Next post Missions Conference Asks, ‘What is that in your hand?’