World News Nov. 6: The IRS says it is not auditing churches, because it does not have the authority to take away churches’ tax-free status. Read more about this and other news. 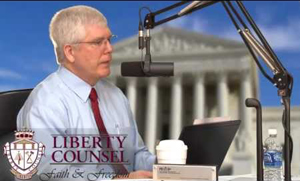 The Internal Revenue Service has officially reported what Liberty Counsel says it has been saying all along: The IRS is not auditing churches, because it does not have the authority to take away churches’ tax-free status, reports charismanews.com. For years, leftist groups, such as Americans United for the Separation of Church and State, have used deception and fear tactics to censor the church and muzzle pastors. A recent letter to religious leaders by Executive Director Barry Lynn inaccurately said, “If the IRS determines that your house of worship has engaged in unlawful intervention, it can revoke the institution’s tax-exempt status.” An IRS spokesman said last week that the agency has been inundated with complaints, but they are not going to do any audits because they do not have the authority to do so. “Churches are tax-exempt inherently,” says Mat Staver, founder of Liberty Counsel. “They don’t need a letter from the IRS to be tax exempt, so their tax-exempt status cannot be taken away by the IRS.” No church has ever lost its tax-exempt status for opposing or supporting a candidate for political office. Churches and pastors may speak on biblical and moral issues. They can educate about the candidates’ viewpoints. They can encourage people to vote and can assist them in getting to the polls. This year Liberty Counsel said it sent over 100,000 copies of its Take Back America: Silence Is NOT an Option to pastors and church leaders across America, to encourage pastors and church leaders to speak truth to this generation. More pastors have been involved this year than ever before, even pastors who have been silenced in the past. Billy Graham is running full-page ads in a number of newspapers across the country, urging voters to vote for candidates that support Biblical values of life, natural marriage, and religious liberty.