World News Feb. 17: Conservative Christian groups are outraged that a school decided a lunch a preschooler's mother prepared was not healthy enough and replaced it with chicken nuggets. Read more about this and other world news. 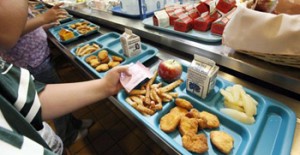 Conservative Christian groups are outraged that a school decided a lunch a preschooler’s mother prepared was not healthy enough and replaced it with chicken nuggets, reports onenewsnow.com. The student also brought home a bill for the cost of the school lunch she had to eat instead. The elementary school in Raeford, N.C., decided the 4-year-old’s lunch—which consisted of a turkey-and-cheese sandwich, banana, potato chips, and apple juice—did not meet nutritional standards established by the U.S. Department of Agriculture. Why? Because it did not contain a vegetable. The USDA guidelines say lunches, even those brought from home, must consist of one serving each of meat, milk, and grain, and two servings of fruit or vegetables. Those guidelines, introduced last month as “historic improvements” by the federal government, spring from the Healthy, Hunger-Free Kids Act championed by First Lady Michelle Obama as part of her Let’s Move! Campaign and signed into law by President Barack Obama. Dr. Janice Crouse, senior fellow for the Beverly LaHaye Institute at Concerned Women for America, sees the incident at the North Carolina school as historic in another sense. “It’s another way that the government says it knows best, another way to waste taxpayer dollars, quite frankly, and to really irritate parents,” Crouse told OneNewsNow.