World News Aug. 31: Republicans approved a party platform at their national convention Tuesday that would ban all abortions and gay marriages and reshape Medicare. Read about this and other world news. 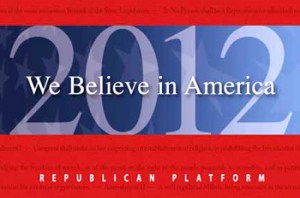 Republicans emphatically approved a toughly worded party platform at their national convention Tuesday that would ban all abortions and gay marriages, strengthen Medicare, and cut taxes to energize the economy and create jobs, reports news.yahoo.com. The document opens by warning that while the American Dream has long been of equal opportunity for everyone, “Today that American Dream is at risk.” It pledges that the GOP will “begin anew, with profound changes in the way government operates; the way it budgets, taxes and regulates.” Both parties routinely approve platforms at their conventions every four years, meant to encapsulate their principles and goals. Much of their details are customarily ignored when it comes to actually governing. “This ambitious blueprint projects a sea change in the way that government works,” said Virginia Gov. Bob McDonnell, who led the party’s platform committee. “It offers a solution for workers without jobs, families without savings and neighborhoods without hope.” Democrats lambasted the platform. In other news, the host committee for the Democratic National Convention is raising a number of eyebrows after choosing to proceed with featuring Islamic “Jumah” prayers for two hours on the Friday before its convention, though Democrats earlier denied a Catholic cardinal’s request to say a prayer at the same event, reports theblaze.com.