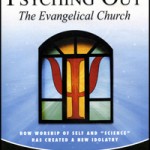 Recently, an increasing number of voices have expressed concern over the virtual disappearance of effective, exhortative preaching in churches and the proliferation of pop psychology in its place.

The person speaking in this production, T. A. McMahon, stirs the viewer to seriously ponder these issues. He contends that many people who profess to believe in the inerrancy of Scripture oddly deny its sufficiency, having a mind-set that somehow we must “help out” the Word. Some churches, he points out, have even gone into so-called Christian yoga. He also points out where today’s emphases began and why knowing origins is so important.

McMahon grew up in the home of a psychiatrist who had been involved, along with others, in bringing about the “psychologizing” of evangelical churches. Perhaps one of the most valuable parts of the DVD to the average viewer is McMahon’s dispelling, with documentation, several common myths about psychology.

Next post Resurrection of the Divine: Compelling Evidence for the Risen Christ

Previous post Proposed Changes to the GARBC Articles of Faith