World News May 15: Leaders of some of the nation's largest religious denominations say they are distressed and saddened by President Obama's support for gay marriage. Read more about this and other world news. 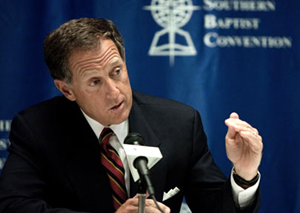 Leaders of some of the nation’s largest religious denominations say they are distressed and saddened by President Barack Obama’s newly announced support for gay marriage, reports newsmax.com. New York Cardinal Timothy Dolan, who heads the U.S. Conference of Catholic Bishops, said Obama’s remarks “undermine the institution of marriage, the very cornerstone of our society. The people of this country, especially our children, deserve better. The Rev. Bryant Wright, president of the Southern Baptist Convention, called Obama’s statements “a calculated, politically expedient decision that completely ignores the biblical foundation of marriage.” Tony Perkins, president of the Family Research Council, said that presumed GOP presidential nominee Mitt Romney, “who has signed a pledge to support a marriage protection amendment to the U.S. Constitution, may have been handed the key to social conservative support by President Obama.” Bob Vander Plaats, the head of The Family Leader, a conservative faith group focused on politics in Iowa, said that the move will stoke a part of the religious base even more against Obama. “They were already fired up to get rid of Obama. This will only make them more on fire to get rid of Obama. And if I’m Romney today, I’m smiling,” he said. The Rev. Richard D. Land, president of the Southern Baptist Convention’s Ethics and Religious Liberty Commission, said in an interview with The New York Times that he was both “saddened and mystified” by the president’s declaration. “When the president comes out in favor of something it has an impact, and that saddens me because I think embracing same-sex marriage would be a terrible mistake for the country,” he said. The Rev. Leith Anderson, president of the National Association of Evangelicals, an umbrella group that represents 45,000 churches in 40 denominations, also expressed disappointment to The New York Times. “The evangelical community is broadly committed to define marriage as between one man and one woman and will not accept an unbiblical definition,” he said. “Considering that 10 of the 16 battleground states have marriage amendments that could be overturned by the president’s new policy position on marriage, today’s announcement almost ensures that marriage will again be a major issue in the presidential election,” said Tony Perkins. Richard Land said he had received phone calls from two black Southern Baptist ministers who said they could no longer vote for the president, and he added, “I know the president is a really smart man, and his campaign staff are really smart, but they have to know it was black votes that carried the opposition to same-sex marriage to victory in California.” Evangelist Franklin Graham accused the president of having “shaken his fist” at God by changing his position on same-sex marriage, reports newsobserver.com. “It grieves me that our president would now affirm same-sex marriage, though I believe it grieves God even more,” Graham said in a prepared statement. “This is a sad day for America. May God help us.”