World News Oct. 19: A group of Texas cheerleaders may continue to display Biblical-themed banners during high school football games, a judge says. Read more about this and other news. 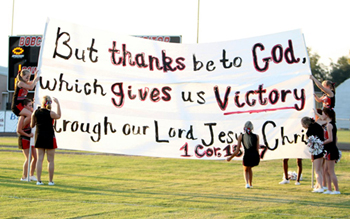 A judge ruled Thursday that a group of cheerleaders fighting for the right to display Biblical-themed banners during high school football games in their small Texas community may continue to do so, at least until the battle goes to court next June, reports nbcnews.com. The cheerleaders in Kountze prompted a complaint to the school district in September when they rolled out banners with Scriptural references, such as “I can do all things through Christ which strengthens me,” and “But thanks be to God which gives us victory through our Lord Jesus Christ.” A letter of complaint from the Freedom From Religion Foundation prompted Kountze Independent School District Superintendent Keven Weldon to bar the religious banners.

Next post Ladies' Retreat: "You Are God; You Know Best"