Can U.S. Conduct Lethal Drone Strike on Its Citizens?

World News Feb. 8: The Department of Justice has developed a white paper outlining the circumstances under which the U.S. can conduct a drone strike against an American citizen. Read more about this and other news. 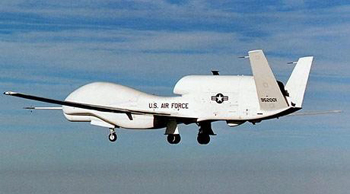 The Department of Justice has developed a white paper outlining the specific circumstances under which the United States can conduct a lethal drone strike against an American citizen, a copy of which was obtained Monday by NBCNews, reports thehill.com. The paper provides the first detailed look at the criteria the Obama administration uses to judge if it can legally kill American citizens traveling abroad without the benefit of due process. The release of the administration’s legal rationale comes days before CIA nominee John Brennan is scheduled to testify before the Senate Intelligence Committee. Panel members, including Senate Intelligence Committee Chairwoman Dianne Feinstein (D-Calif.) and Sen. Ron Wyden (D-Ore.), have been pressing the administration on the issue for more than a year. In the document, the Justice Department concludes that a lethal strike against a senior operational leader of al Qaeda—or an affiliated terrorist group—can occur if a three-part test is met: that a high-level American intelligence official has determined the individual poses an imminent threat, that capture is infeasible, and that the strike is conducted according to the laws of war governing use of force. “This conclusion is reached with recognition of the extraordinary seriousness of a lethal operation by the United States against a U.S. citizen, and also of the extraordinary seriousness of the threat posed by senior operational al Qaeda members and the loss of life that would result were their operations successful,” the memo reads. The memo does not carry legal weight, although administration officials told the network the document is similar to classified guidance developed by the Justice Department’s Office of Legal Counsel. It also provides a legal justification for the killing of cleric Anwar al-Awaki in Yemen in 2011. Al-Awlaki, a senior leader in al Qaeda born in the United States, was linked to multiple terrorist attacks, including those of Maj. Nidal Malik Hasan, the Army psychiatrist charged in the 2009 Fort Hood shootings, and Faisal Shahzad, who tried to set off a car bomb in Times Square last year. Much concern is being expressed over drones used wrongly against U.S. citizens. One big concern is that this is another attack on Americans’ constitutional rights. Drones are being used to kill terrorists in some parts of the world. The haunting question is, “When will some law abiding American citizens be labeled as terrorists?” asked a report in minutemennews.com.