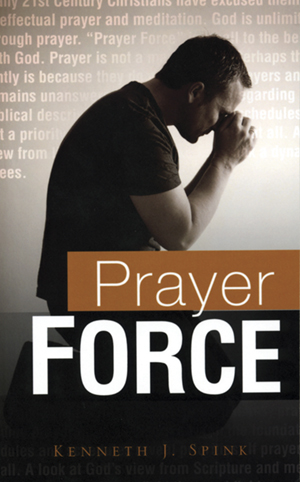 It’s a delight to consider for review books written by people in our Association; Kenneth Spink is a pastor of one of our GARBC churches. His book Prayer Force emphasizes such aspects of prayer as the reasons for unanswered prayers, essentials in prayer, perseverance in prayer, fasting, and the like. Throughout the book are thought-provoking statements: “Counseling has grown into a mega-ministry today in Christian circles. Frequently, prayer is treated in counseling as a helpful tool rather than an indispensable solution. All too often, preaching, homiletics, teaching and Christian education look for the secret to success in better schooling with little or no emphasis on prayer.” “The answer to America’s spiritual and moral decline is thought to be in greater ‘Christian’ unity and political lobbying rather than in prayer. People will come to a ‘prayer breakfast’ to hear some high-powered celebrity [speak]. . . . The real agenda is not prayer; it is promoting a united ‘Christian’ force in the political arena, not the prayer closet.” “Our fast-paced world is designed to keep us occupied with other matters so as not to think about the daily war against sin within. . . . Be very afraid of your weaknesses and tendencies. Think about them and talk to the Lord about them. In your meditative moments, let your heart tremble with a godly fear!” Spink also warns about leaving “ordinary” churches for more “exciting” churches. Spink grew up in an “ordinary” church that brought him, his brothers and sisters, and others to salvation through the years. “Don’t be too quick to pronounce a church dead.” Spink also warns about trying to bring about revival in wrong ways.