“I Will Sing the Wondrous Story” 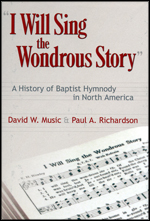 A History of Baptist Hymnody in North America

The preface begins, “Baptists have long been known for their love of congregational singing and the enthusiasm with which they have engaged in it.” And more Baptists wrote hymns over the years than most people realize, as this book should show. These observations would in themselves be enough reason to compile this work, which first takes the reader back to England and early Baptists there. Then, logically, the work turns the reader’s attention to the beginnings of Baptist church music in America, with an interesting chapter devoted to the earliest hymnals in America. The advent of various splits and burgeoning groups of Baptists in the 1700s and 1800s brought various flavors of Baptist hymns, and the Civil War period calls for attention in itself. Following that time came the institution we still know as the Sunday School and the ensuing revivals and their gospel songs. In the last century came other hymnals including “denominational” hymnals among Baptist groups. Those who didn’t use these began to use hymnals published by interdenominational publishers. The work concludes with an extensive bibliography and index of Baptist hymnals, along with a thorough general index.

Anyone interested and involved in Baptist hymnody will want to obtain this book, keeping in mind that it covers a wide spectrum of Baptists, rather than giving a fundamental Baptist slant.