The Art of Dying: Living Fully into the Life to Come 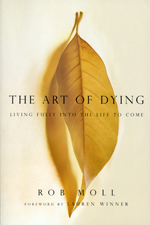 Everyone dies, though modern science and technology have postponed death for many people: “Through medicine and science we know more about death and how to forestall it than ever before. Yet we know very little about caring for a dying person. We don’t know what to expect or how to prepare for our own death.” Moll calls for us to recover the deeply Christian practice of dying through preparing for the event. He notes that in the past, Christians have sought to die well: “A death that doesn’t afford the opportunity for last words, for reconciliation, for repentance and for spiritual preparation for the next world is not a good death, according to traditional Christian teaching. . . . Deaths were recorded by family and friends and retold to those in the community who could not be present. The community drew comfort and encouragement from reports of those who crossed over in peace and hope. Preachers took the opportunity of a death to remind congregants of the source of death—sin—and its remedy through eternal life in Jesus Christ. In all these ways, people learned how to die well, so that when the time came, they were prepared.”

Moll reminds us that churches throughout history commonly had their own cemeteries next to their church buildings: “The ‘communion of the saints’ meant far more than pot luck dinners and small group fellowship.”

The Art of Dyinghas much food for thought, though the reader may find an item or two of disagreement before finishing
the work. Chapters include “Caring for the Dying,” “The Christian Funeral,” “Grief and Mourning,” and “Living in Light of Death.” At the end of the book is a study guide, with questions for each chapter.

Next post Alcohol Today: Abstinence in an Age of Indulgence