On the Fruit of the Vine: In Defense of Biblical Consistency 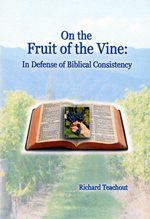 In both an article and a book review, the last issue of the Baptist Bulletin addressed the subject of the believer’s use of alcohol. Here is another book on the subject, written by a missionary in our circles who explains his understanding of Scripture and tells of several personal experiences that might add light to the subject. For example, he relates how a French vineyard owner demonstrated to him how grape juice can be preserved fresh for an entire year, disproving the idea that the Scriptures approve of alcohol simply because preserving grape juice was impossible in Bible times.

The book abounds with facts and figures. One chapter challenges believers to face the subject squarely, rather than avoid it because of its controversial nature. Along with dealing with “problem passages” in the Bible, such as 1 Timothy 5:23, the book answers frequently asked questions such as, “Was Jesus a brewer?” and “Is moderate drinking really safe drinking?” The book also stresses the tragedy of teen drinking and its early start, stating, for example, “Every day in the U.S. more than 13,000 children and teens take their first drink.”