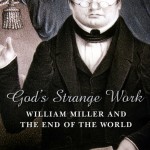 No, we’re not in a vendetta against the well-known sect called Seventh-Day Adventism. It’s just that two truly interesting review copies arrived almost simultaneously, one focusing largely on William Miller, from whom Adventism’s traditions sprang, and the other focusing on Ellen G. White, founder and visionary.

Both books provide a historical setting for each individual, as well as research on the subjects and on Adventism itself.

Miller gained notoriety for his obsession with date-setting for the Lord’s return. On Oct. 22, 1844, he gathered followers, who had “[given] away their possessions, abandoned their work, donned white robes, and ascended to rooftops and hilltops to await a Second Coming that never actually came.” Ellen G. White set in motion the sect’s obsession with health issues, in addition to unorthodox doctrinal beliefs. She was a colleague of J. H. Kellogg of cereal fame and of Sylvester Graham, whose surname we still see on graham cracker boxes.

At the time, America found religious “fires of enthusiasm” burning, and “burned-over districts” became the “seedbed of new sects.” Miller had been a Calvinistic Baptist at the beginning; then he became a deist. Later he became concerned about his fate after death and began to focus on prophecy. His theological development was basically homegrown, and it was also affected by the emotionalism of revivals of the time. “How he came to preach for the first time is legendary among Adventists.”

Receiving divine visions characterizes the biographies of both Miller and White. As for White’s strong association with health issues, she had fertile ground to work with:

America in the early nineteenth century was a sick and dirty nation. Public sanitation was grossly inadequate, and personal hygiene, virtually nonexistent. The great majority of Americans seldom, if ever, bathed. Their eating habits, including the consumption of gargantuan amounts of meat, were enough to keep most stomachs continually upset. Fruits and green and leafy vegetables seldom appeared on the table, and the food that did appear was often saturated with butter or lard . . . all washed down with many cups of strong Brazil coffee.

Sadly though, White “saw obedience to the laws of health primarily as a requirement into heaven.”

The reader will decide whether the writers of these books are either too easy or too harsh in their treatments of Miller and White. (Prophetess of Health mentions efforts to suppress information due to evidences of White’s alleged contradictions and plagiarism in a good percentage of her writings.) Both books have indexes. Prophetess of Health has a bibliography and several appendixes.

We can learn some valuable lessons by studying these individuals. Their movements can appeal to a multitude, just as do other isms that strike a chord with people and their needs yet lack a Biblical basis.

Next post At the Center: Dancing and the Local Church