World News Sept. 21: A so-called Gospel of Jesus' Wife isn't sending shock waves through the Christian world as some publications have reported. Read more about this and other world news. 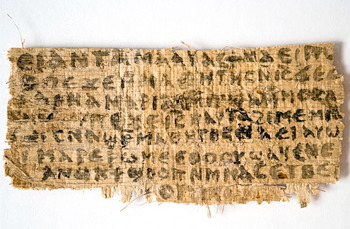 A so-called Gospel of Jesus’ Wife isn’t sending shock waves through the Christian world as some publications have reported. In fact, many are dismissing the ancient fragment as either insignificant or forged, reports The Christian Post. “This is sensationalism masquerading as scholarship,” said R. Albert Mohler, president of The Southern Baptist Theological Seminary, in a commentary Thursday. Christian scholars largely are not fazed by the discovery. Sean McDonough, professor of New Testament at Gordon-Conwell Theological Seminary, told CP that he believes the papyrus “is simply the latest in a seemingly endless parade of sensationalist headlines obscuring sober historical thinking about the Bible. At best, we have a scrap of papyrus that perhaps (the fragmentary nature of the piece makes it impossible to have any clear idea what it is actually about) one person in the ancient world, who wrote about Jesus centuries after the fact (Karen King, the scholar who unveiled the piece, suggests late second century, but at this point this is speculation) suggested he had a wife,” McDonough contended. “As King herself says, it tells us nothing about the actual facts as to whether Jesus had a wife. Yet headlines continue to state that a ‘historical document’ says Jesus had a wife.” Dr. Christian Askeland, an expert in Coptic manuscripts, revealed that those who specialized in Nag Hammadi and early manuscripts are either “extremely skeptical” about the fragment’s authenticity or convinced it’s a fake. “The only historical documents about Jesus that can be reliably dated to the first century—namely the four canonical gospels—make no mention of Jesus having a wife,” said McDonough. “They fully support the traditional view that Jesus had no wife. The recent papyrus find does nothing to change this.” Mohler, meanwhile, raised suspicion about the motive behind all this. Though King expressed her desire to avoid sensationalism, Mohler pointed to the curious title she gave the fragment. “King was so concerned about avoiding sensationalism that she titled the fragment ‘The Gospel of Jesus’ Wife?'” he posed. The Southern Baptist theologian believes that those behind the new finding are trying to cast doubt on the New Testament. “The energy behind all this is directed to the replacement of orthodox Christianity, its truth claims, its doctrines, its moral convictions, and its vision of both history and eternity with a secularized—indeed, Gnositicized—new version,” he stated.