Baptists through the Centuries 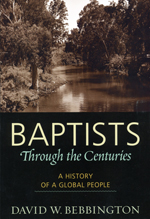 Every Baptist needs to know what Baptists believe and practice, but they also should know Baptist history. Here is a fresh chronological summary of Baptist life and thought through the centuries, written by a history professor. Starting with the roots and the Reformation of the 16th century, the book wends its way through the influence of the Anabaptists (Mennonites), the emergence of “general” and “particular” Baptists in 17th-century England (the book defines and explains these groups), revival and evangelical beginnings in the 18th century, divisions among Baptists during the 19th century, and the theological polarization that ensued as the 20th century unfolded. Other chapters deal with Baptists and the social gospel, foreign missions, religious liberty, church ministry, the “sacraments” (Baptists came to reject this concept/term in favor of “ordinances”), women in Baptist life, and “Baptist identity” (core distinctive beliefs). The book is scholarly yet clear. It has an index, a bibliography, notes, and illustrations.