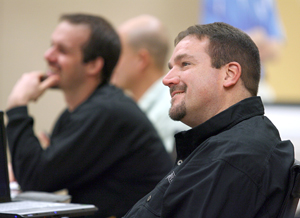 On June 1, 1990, Calvary Baptist Church was introduced to a man who would have a profound impact on the lives of their children and grandchildren. Fresh out of Grand Rapids Baptist College, Donald R. Jackson was ready to change the lives of youth. The last 20 years have yielded a fruitful youth ministry. What started out as a small youth group of 40–50 grew into a large student ministry of more than 100. His vision was to create a group of teens who were actively living for Jesus Christ and looking for ways to impact the lost, and that influence on teens is evident in the decisions of many to become involved in ministry around the world.

On his way to fulfilling that vision, Pastor Don involved his teens in many ministry-based activities. The most widely known, at least for Battle Creek, was Fright Night, a Halloween alternative for teens in the community. What began in Calvary’s basement with about 40 teens grew into 2,000 teens overrunning Battle Creek’s Kellogg Arena. Don used the night not only to provide teens with a fun, safe environment on Halloween, but also to present the message of salvation. Fright Night enjoyed a 10-year run before Don felt it was time to bring it to an end.

Pastor Don also believed it was important to provide the teens with opportunities to serve through missions trips both locally and abroad. In addition to onetime trips to Florida and New York, missions trips to Chicago and Philadelphia became summer regulars, and international trips to Brazil, Mexico, and Germany were presented at varying intervals. Those trips offered the opportunity for growth and change for those who went along and set many teens on the paths they walk today.

Don’s impact has reached not only his church family but the Battle Creek community as well. He has enjoyed increased involvement with Pennfield High School through Students Living In Christ (SLinC), a group that meets during the school year to pray and discuss things on teens’ minds. When SLinC began, the group included eight Calvary Baptist teens. Last year the group had grown to 40 Calvary and public school teens, half of them unsaved. Due to his involvement in the community and school system, Don was asked to be on Pennfield’s Sex Education board. This school year he was given the opportunity to speak with both the junior high and high school students on the subject of abstinence. Don also speaks annually to the high school graduates at Pennfield’s commencement ceremony held at Calvary Baptist Church, an honor that began 16 years ago.

As his local ministry expanded, Don has become a requested speaker at camps, churches, and youth events throughout the United States. And as his partnerships with other Christian ministries grew, so did his opportunities to reach teens. One of those partnerships was introduced into Don’s life seven years ago when he involved his student ministry with Vision for Youth during the organization’s missions trips to Chicago and Philadelphia.

During that time, Don became a member of the Vision for Youth board. Then, about a year ago, he heard God calling him into full-time ministry with the organization. As director of student missions, Don will take his passion for Jesus Christ and teens into a ministry that will allow him to make an even larger impact on the world.