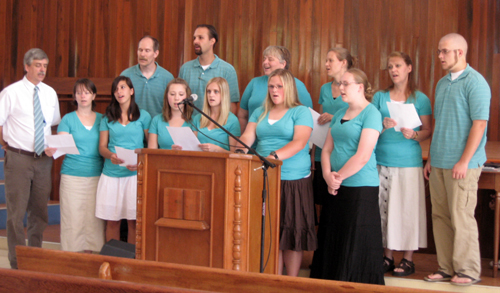 Calvary’s youth pastor, Logan Friess, says, “Our aim in going on this trip was to be committed to serving the Leonards and ministering to their needs. Quite the opposite happened. We are eternally grateful for the experience of joining arms in the ministry with the Leonards. May God richly bless them for freely giving of themselves, their resources, and time.”

The team spent their two Sundays in Crato attending First Baptist Church in the morning and the Leonards’ work, Parque Grangeiro, in the evening, and at Source of Light Baptist Church in Juazeiro. Team members sang, spoke, or shared testimonies in these services. On their first Sunday, the team toured Crato and went to Seminário Batista do Cariri, where they had a crash course in Portuguese. 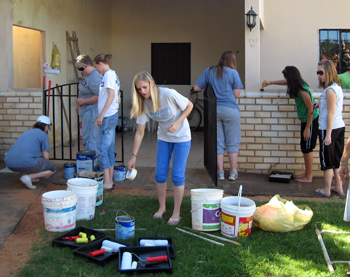 Monday was a work day, with the team painting eight homes for married seminary students and installing a sound system in the seminary chapel.

For the next three afternoons, the team conducted kids’ camp, which was much like a mini VBS. About 60 children attended, and nine accepted Jesus as their Savior. The language barrier caused some interesting moments, but the group had a good experience. One of the team members says, “When the kids’ camp was over, we walked/drove to some of the kids’ homes. They were so excited to have us come visit their homes.”

After kids’ camp, the team conducted English camp, which involved serving American-style foods like pizza, hamburgers, pancakes with syrup, and s’mores. The team found it challenging to prepare American menus without the small appliances and prepackaged foods Americans are used to using. 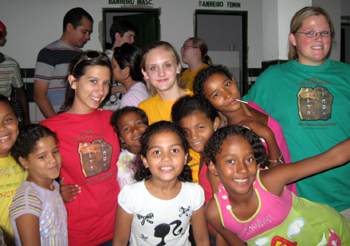 Games played an important role in English camp. The campers, who ranged in age from youth to adults, divided into smaller groups, with one or two Americans per group. One of the Calvary team members says, “It was hard to play many of the games because some groups had beginners in English, and that was the language that they need to use (it was fun though).”

Another important part of English camp took place when the Calvary team told about their everyday lives. These American stories “prompted many questions about our Christian life.” Team members wore gospel bracelets (a craft from kids’ camp), and were asked why they wore them. “This gave a great opportunity to clearly share the gospel. What a blessing this was for us,” reports the trip blog.