SCHAUMBURG, Ill.—When I arrived at a free car wash, I was surprised that the teens running it didn’t look happy to see me. Turns out, they’d mistaken me for a civic authority coming to make them stop what they were doing. 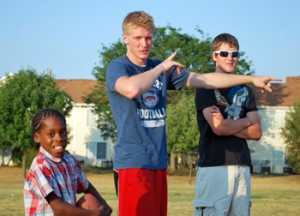 SCHAUMBURG, Ill.—When I arrived at a free car wash, I was surprised that the teens running it didn’t look happy to see me. Turns out, they’d mistaken me for a civic authority coming to make them stop what they were doing.

Representing two Iowa churches, the 17 teens and their six adult sponsors teamed up for a joint missions trip to the Chicagoland area. Although some of the teens knew each other from camp or Talents For Christ, the group had not worked together before they got on the bus for the six-hour drive to Illinois.

“There’s that awkwardness at first,” says Greg Gosnell, youth pastor of Faith Baptist Church in Mason City. “They come from all different backgrounds, but it’s really neat to see them put aside their differences to serve Christ together.”

Both youth groups prepared their teens for the trip in similar ways—serving in various ministries, reading books, and memorizing Scripture. One week before the trip, Pastor Dan Fields of First Baptist Church in Creston took his teens on a wilderness trip to spend some time intensely studying the Bible and working together before joining the teens of the other youth group. 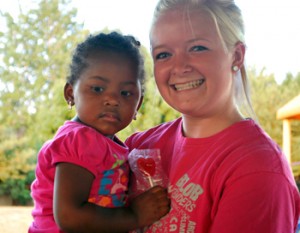 “It’s great to have like-minded churches to work with, and for the teens to see that so they know their church isn’t a little island,” Fields says. “The goal is to teach students that life is ministry: every opportunity of every day is ministry. The time you spend with people—believers or unbelievers—it’s ministry.”

That ministry took some unexpected forms for the teens. At an outreach in a local park, Janette Huang, 17, was able to use the knowledge she’d gained from studying a Catholic Bible and the Book of Mormon in preparation for the trip. During the same event, Ashley Pearson, 18, who has enjoyed learning sign language since she was a child, met and communicated with a deaf teenager.

For Enoch Pedersen, 18, and Andrew Franklin, 18, returning to the Chicago metropolitan area was especially exciting. Last May, the two teens from Faith Baptist Church traveled to help with the interior construction of Great Commission Baptist Church in Schaumburg. “When we left, the walls were up, but it was pretty bare,” Pedersen explains. “So it’s cool to come back and see it completely finished.”

The seven-day trip has allowed the teens to collect donations for a local food pantry, organize fun events for teens at a nearby park, and raise awareness for Great Commission Baptist with a free car wash. Since they were representing a church, Pastor Fields had reminded the enthusiastic teens not to goof off or spray each other with water, so they found it especially humorous when I was accidentally showered mid-interview . . . by Fields himself.