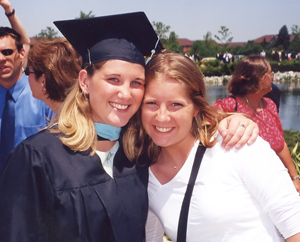 I never planned to have valleys on the topographical map of my life. My map, as I saw it, would always consist of the high road. The smooth road. The pathway lit up by God’s love and decorated with His gift of the abundant life. It was to be the journey of the trying-to-be-godly-but-appreciating-a-forgiving-God Christian. The walk of a trusting believer.

Yet here I am, still surprised and shocked to be walking through the valley of the shadow of death.

The way I figured it, my wife and I would raise our four kids in the way they should go, and when we were old, they would all be there to take care of us.

Yet on a gorgeous Michigan spring night in June 2002, our lives veered off the path we thought would be ours for the rest of our time on earth. We careened off that pathway and went straight into the valley—an unfamiliar, dark, and deep ravine of near hopelessness.

Melissa was at a cottage on Lake Michigan with some school friends where the parents hosted an end-of-school party of pizza, jet-skiing, and just good times. Melissa had called her mom at eight o’clock to tell us she would be on her way home with her boyfriend, Jordan, at nine.

But on their way home that night, traveling on an unfamiliar road, Jordan pulled his car into an intersection—where it was hit broadside by another teen driver.

Melissa, our seventeen-year-old daughter and sister—a girl who loved to cook odd concoctions in the kitchen, who never liked to be idle for a minute, who played varsity football and volleyball, who had a solid though not flashy life for Jesus, who was a bright light of joy and love to her many friends at school and church, and who had grown from a frightened little preschooler into a self-confident teen—was killed instantly.

Our family was plunged into a new existence. Now the mountaintop was so far away we couldn’t see it.

Have you ever been in the valley? The valley that comes with life’s troubles and pain? If so, or if you have ever walked with those who dwell in its misty atmosphere, I invite you to walk along with me for a while. Beyond the Valley grew out of my own spiritual journey and my desire to provide spiritual help for the hurting.

It’s funny how your perspective changes when you get older.

When I was a teenager, a friend of mine was killed by a tornado that hit her house. As I think back to that time, I don’t recall thinking much about her parents and what it must have been like to lose a teenage daughter. I thought more about the loss in light of being her friend and about how it affected other kids my age. I remember feeling really bad for her sister too.

But I don’t think it dawned on me to consider the effect the loss of a young person had on her mom and dad. I’m not sure if they are still alive, but I know now that if they are, every day is another reminder of that tragedy that took place in the 1960s.

A young death affects many people because it is so out of order, because of what it robs from a family, and because it is life-changing for those left in the wake.

I now know more about this than I ever wanted to. I wish I had understood it those long years ago.

Long before death visited our family, we were deeply affected by the story of a young couple we knew. Back when our children were young and we were still marveling in God’s miraculous provision of them in our family, we watched at a bit of a distance as a young man and his wife suffered through the deaths of not one, not two, but three newborns.

And finally, the babies stopped coming.

This couple’s life, it turned out, would be lived with only lost dreams and shattered hopes of the terrible twos, preschool, elementary school grandparents’ days, middle school trials, high school excitement, graduation, college, marriage, and grandparenthood. It’s the life of the unfulfilled dream. I think, too, of another member of our family—my wife’s sister, Mary. At about the same time that young couple was devastated by their unspeakable trio of losses, our family was reeling from the death of my sister-in-law’s little girl. Even before Mindy was born into a life that would span hours, not weeks, we knew something was terribly wrong with her. Her survival was questionable.

Yet when Mindy died, the grief was unimaginable for our family. I’ll never forget looking at that tiny casket and wondering why we have to make death provisions for little angels like Mindy.

A little while later, Melissa was born, and we celebrated her life. While Mindy’s mom, Aunt Mary, slogged through each day wondering about the “what ifs” and the “what would be happening now” of a Mindy she hardly knew, we were able to enjoy Melissa and watch her grow and learn, laugh, and love.

Young death. It forces young parents into an existence of watching other little boys’ and girls’ life celebrations. Empty arms reach into the darkness. Empty hearts yearn for the tiny touch of those little hands. Empty ears strain to hear again that hearty cry of a child in need of Mom or Dad.

Those three little babies. Mindy. Melissa. And so many other little ones, middle ones, and teenage ones. Precious children of brokenhearted parents—parents robbed of growing-up experiences and the culmination of a lifetime of training.

Except for several important truths—except for one God-directed reality—this venture into grief would be a dark journey into hopelessness. And these are the truths: God is in control; He cares for grieving parents more than they can imagine; and He has a difficult yet vital, viable favor to ask.

No death, no matter how tragic and incomprehensible to us, falls outside God’s sovereign control. As the Author of life and the Superintendent of our days, He alone has the right over the number of those days.

No death is capricious or unremarkable in God’s eyes. Each reminds us of His role as the God of all comfort, and each places on us a responsibility to transfer to others the comfort He provides us.

Grieving parents are asked, amidst their difficult circumstances, to become comforters-in-training—taking what they learned from the God of all comfort and using it to surround other sorrowing souls with a divine measure of care. Those who suffer young death simply have a longer time to receive God’s care, a more extended training session, and an extended lifetime of helping others in need.

It’s the job no one volunteers for and no one wants. Yet it is most noble. Because life is what it is and because God’s plan calls for people to carry out some of the Heavenly Father’s most honored tasks, those who have lost children are equipped in God’s school of comfort-giving to pass along their lessons to those who follow their trail of tears.

Young death is a terrible reality. But from that reality comes an empathy, a compassion, and a knowledge that is best used when directed toward helping others in distress.

Somehow, the death of a saint is blessed in God’s eyes. Somehow, God comforts those who suffer that loss. And somehow, we who have walked the dark pathway of death must find it in our hearts to light the way for those who follow.

This is why I write about Melissa—knowing that our story will be the experience of others and God’s hope will need to be conveyed. We learned from watching our young friends who lost three little ones. We learned from Mindy’s parents. And now it’s our turn to pass God’s comfort along to others.

Have you been around a family that lost a young child? Don’t forget them. Send them cards. Send them e-mails. Especially remember the anniversary date of the death. Keep this in mind: They will never get over that loss. They move on, but they will never move past it.

When you read reports about young death in the newspaper, make it a habit to pray for those families.

Dave Branon is an editor for Discovery House Publishers and Radio Bible Class Ministries and is a popular contributor to Our Daily Bread. He is a member of Trinity Baptist Church, Grand Rapids, Mich. Dave has written over 2,000 devotional articles and 14 books, and was formerly the editor of Sports Spectrum magazine.