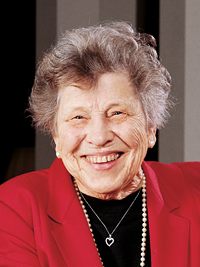 Corabelle Stowell, 94, died on March 26. Corabelle was a pastor’s wife, serving with her husband, the late Joseph Stowell II.

Dr. Stowell had been a pastor in Michigan and Indiana before he met Corabelle, a Baptist pastor’s daughter. During his first pastorate in Dollar Bay, Mich., Joseph organized Calvary Baptist Church in the nearby town of Hancock. Pastor R. T. Ketcham of Central Baptist Church, Gary, Ind., then asked him to take over the church’s Brunswick Mission and organize it into a church, now called Bethel Baptist Church in Crown Point, Ind. While in Gary, he taught a Thursday night Bible class in a home in Michigan City, Ind., and after a year led in organizing Evergreen Baptist Church in that city.

Corabelle first noticed Joseph at a pastors’ conference in southern Michigan. Her father was the chairman and had asked Corabelle, still in high school, to go along to play her vibraharp. One of the speakers was Joseph Stowell, but he didn’t pay any attention to her at the time. Two years later she saw him again at a Gull Lake Bible Conference, where she played her vibraharp. This time, after a service, he sought out Corabelle. She shared in a 2001 Baptist Bulletin interview, “He came over to me and said, ‘I’d like to come and see your father’s new tabernacle.’ I told that to my father. He said, ‘Corabelle, what did he say he wanted to see?’ [Laughter].”

The couple married the following June.

The first church the Stowells served in together was Tabernacle Baptist Church, Ithaca, N.Y. There they were involved in Cornell University’s InterVarsity program and acted as unofficial parents to many students. For four years Joseph hosted a gospel program on the university’s radio station, with Corabelle playing her vibraharp.

In each ministry, Corabelle looked after their home and family, knowing that in training her children, she was training future servants of the Lord. And as they grew older, she took on more responsibilities, like teaching Sunday School classes, playing the organ, working with women’s groups, and speaking at conferences.

Corabelle has said, “My life verse is Colossians 3:17: ‘And whatsoever ye do. . . .’ A pastor’s wife has ‘whatsoever’ to do—cleaning, making the beds, cooking, loving. We wear so many hats. ‘But whatsoever ye do . . . , do all in the name of the Lord Jesus, giving thanks to God and the Father by him.’”

When asked what qualities are important in the lives of pastors, Dr. Stowell replied, “People have to see in your home a happy marriage—devoted to one another and to the Lord and His work.”

Dr. Stowell had a vast ministry that included not only being a pastor but a radio pioneer, having initiated the nationally syndicated program Living Reality. He was a member of the Baptist Mid-Missions council, vice-president of the Association of Baptists for World Evangelism, and a trustee of Baptist Bible College in Clarks Summit, Pa. In 1969 Dr. Stowell was elected to serve as GARBC national representative, a position he held for 10 years.

The Stowells were married for 69 years before Joseph passed away in 2007.