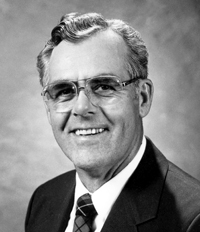 Clarence was born in Berea, Ohio, and lived most of his life there. He accepted the Lord as his Savior in December 1946—the same time he began attending Berea Baptist Church. In fact, Clarence was the longest-attending member in the history of the church, having attended there until his Homegoing.

In 1952 Clarence graduated from the three-year day school of the Bible Baptist Institute of Cleveland (now Cedarville University). He later attended Campbellsville College in Campbellsville, Ky., and ministered in several churches in Ohio while there, mostly in the Cleveland area. He was pastor of Strongsville Baptist Church, Strongsville; Midbrook Baptist Church, Brookpark; Suburban Heights Baptist Church, Garfield Heights; and Valley View Village Church, Valley View. For over 50 years, he also regularly held monthly evening services at the chapel of the Cleveland City Mission, ministering to the homeless in that city.

Clarence was a veteran of WWII and worked full-time as a crane operating engineer. A student of the Word, he also wrote many Bible studies, which his wife, Terry, often typed later. Terry says, “We made copies, and he would hand them to friends, sharing God’s blessings to him with others.”

Clarence is survived by his wife, Terry; two children, Cheryl and Charles; a sister, Viola Christensen; and grandchildren and great-grandchildren.