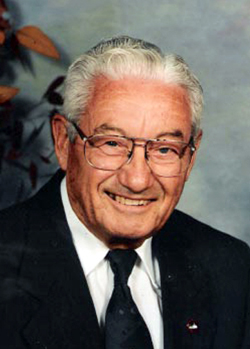 Dick was saved at the age of 12 under the ministry of evangelist Percy Crawford. Following graduation from high school, Dick received a contract to play professional baseball for the Chicago White Sox farm team but chose instead to enter the ministry.

Over the course of his pastoral ministry, Dick served on the boards of Fellowship of Baptists for Home Missions, Evangelical Baptists Missions, and Baptist Church Planters. He received a number of recognitions, including the 2007 GARBC Service Award and authored How Big Is Your God?

Dick attributed the blessings of the Lord to his lifelong habit of starting the day with devotions—both at home and in the office with his staff.

He was preceded in death by his first wife, Dorothy “Dot,” who faithfully served the Lord with him for 53 years.