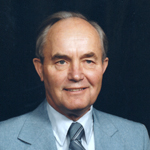 Rus was born in New Durham, Ontario, Canada, and grew up on the family farm. He joined the Royal Canadian Air Force in 1943, serving as a PBY bomber pilot in World War II. While stationed at Pat Pay, Victoria, British Columbia, he met Eileen McCreesh on a city bus. They married in 1945 and celebrated 68 years of marriage in June 2013.

Rus graduated from Northwest Baptist Theological College in 1950 and then pastored Ladner First Baptist Church in British Columbia. He and Eileen moved to the United States in 1955 and fell in love with their adoptive country. Rus and his family became citizens in 1965.

Eileen says that in the U.S., she and Rus were impressed with GARBC churches’ missionary emphasis and support; their Biblical position on separation from modernism; their premillennial, pretribulational position on eschatology; and their teaching that each church is not under a hierarchy.

“Rus enjoyed great fellowship for over 40 years of preaching and pastoring,” Eileen says. In addition to his pastoral work, he was on the boards of the Fellowship of Baptists for Home Missions and Northwest Baptist Home Mission.

He retired from the pastorate in 1992 but filled in at various churches as pulpit supply.

Rus was preceded in death by a son, David.