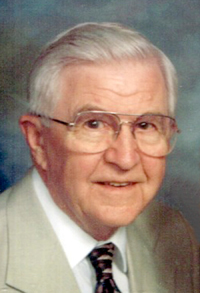 Ken was born in a farmhouse in Red Rock Township, Minn. After reading his Bible when he was a teen, he knelt by his bed and accepted Christ as his Savior. He sensed God’s call to be a pastor and, following graduation from high school, joined his brother Harley in Johnson City, N.Y., to attend Baptist Bible Seminary.

After graduating from seminary in 1944, Ken concurrently pastored three churches in rural north central Pennsylvania until 1945, when he became pastor of Central Baptist Church, Binghamton, N.Y.

On June 14, 1949, he married Lillian Setala. They served at Central Baptist Church until Hiawatha Land Independent Baptist Missions (now Continental Baptist Missions) approached them in 1960, asking them to work as church planters. Ken and Lillian served together in Newberry, Wakefield, and Escanaba in the Upper Peninsula of Michigan; Olewein, Iowa; and Manitowoc, Wis.

In October 1951 he was involved in a two-week United Revival and Evangelistic Campaign with Dr. Ketcham, then GARBC national representative and editor of the Baptist Bulletin. The intent was to shore up unity among the 30-plus Baptist churches in the Triple Cities (Binghamton, Johnson City, and Endicott) area of New York.

Ken lived his life of faith grounded on the truth and promises found in God’s inerrant Word and is now experiencing the promise of 1 Corinthians 2:9, which proclaims that “eye has not seen, nor ear heard, nor have entered into the heart of man the things which God has prepared for those who love Him.”

He is survived by his wife, Lillian; their sons, James, Ralph, Dean, and Steve; seven grandchildren; and five great-grandchildren.