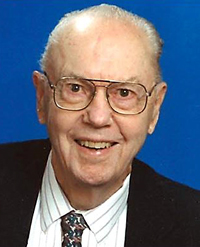 Interrupting studies at Santa Rosa Community College in 1928, Herb served as a seaman on a freighter sailing from San Francisco through the Panama Canal, to Cuba, and finally to New York. Herb hitchhiked back to California. In 1929, bitten by the “sea bug,” he signed onto the S.S. Van Buren, Dollar Steamship Line, as an apprentice officer. During the 110-day globe-circling voyage, the ship visited 13 foreign ports. On that voyage Herb was assured of eternal life in the Lord Jesus Christ. He subsequently attended Moody Bible Institute, graduating in 1932.

Herb married Mabel Phipps of Selma, Calif., in 1934, a graduate of Biola, and together for 71 years they served the Lord.

In 1946 he was instrumental in co-founding Western Baptist Bible College (now Corban University), serving as president for two years. He taught public speaking and music, and served on the board of directors for 22 years.

During later years, Herb and Mae served as campground hosts with the California State Parks System. Spokane, Wash., became their home in 1994. With Mae’s passing in 2005, Herb made his home at Lilac Plaza Retirement Center. Many summers he tended the Lilac roses and was honored to have his name placed on the Rose Garden. Herb enjoyed the activities and friendship of many at Lilac.

Herb’s beautiful tenor voice could be heard throughout his life up to his last days. Singing was his trademark and great joy.