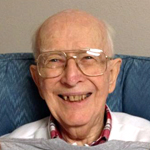 SEBRING, Fla.—Harry Eugene Cole, 92, died Aug. 12. The retired pastor was saved during WWII while serving in the Coast Guard in Alaska.

Harry met his wife, Joan V. Balmer, during his last assignment in Cleveland, Ohio. Following marriage, they both graduated from Moody Bible Institute. Harry was the interim pastor at the old Hough Avenue Baptist Church in Cleveland when it was destroyed by fire. He pastored in East Aurora, N.Y.; Coshocton, Ohio; Gallipolis, Ohio; LaPaz, Ind.; and Sebring, Fla. He also served at various times on the boards of Iowa Regular Baptist Camp, Scioto Hills Christian Camp and Retreat Center, Ohio Association of Regular Baptist Churches, and Baptist Children’s Home.

He was the first pastor of Grace Baptist Church, Cedarville, Ohio, shortly after Cedarville University moved from Cleveland to its present campus. Twenty years later, Harry returned to Cedarville as the assistant manager of the college bookstore and became a deacon at the church he formerly pastored.

He is survived by his wife, Joan; three children, Kenneth, David, and Judith Disch; and eight grandchildren.