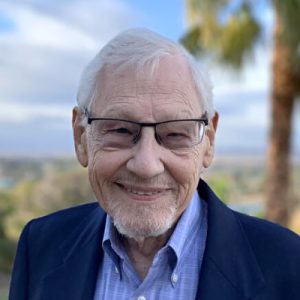 CONCORD, Calif.—Harold Albert, who served in ministry for seven decades and was known to many as “Bud,” died March 30. He was 88.

In 1951, at age 18, Harold was elected president of the Southern California Regular Baptist Youth, an organization that he helped grow by 300 percent during his three years of leadership. Years later, when he was in charge of the Regular Baptist youth programs in the Chicago area and then for the entire state of Illinois, his leadership and vision would result in similar growth and engagement.

In 2003, following his years of service with WBHM, Harold began ministering as a chaplain for the Contra Costa County (California) correctional system. In 2009 he founded Bay Area Chaplains and remained active in the role of lead chaplain until January 2022.

Harold’s spirit of adventure, passion for learning, determination to live a full life, and service to the Lord will continue to be honored and reflected by his family.

He is survived by his wife of 65 years, Dorothy; two children, Timothy Albert and Ruth Meyer; and two grandsons.

A celebration of life service will take place and be livestreamed at Clayton Valley Church, Concord, California, April 23 at 2:00 p.m.