Genella Versluis, a veteran missionary, died Aug. 21. She was 92. 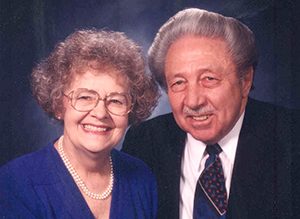 Genella Mieras married Paul Versluis in 1945. After he completed seminary in 1952, the two served with Baptist Mid-Missions for over 50 years. They were involved in planting churches in Hawaii, Michigan, South Carolina, and Alaska. They also established orphanages in India and Burma, founded the Asia Theological Seminary, and inaugurated the Grand Rapids Theological Seminary Extension in Singapore. Even after retirement, they continued ministering in India through Paul Versluis Partnership Ministries. They were longstanding members of Berean Baptist Church in Grand Rapids.

In 1981 Paul Versluis became the first director of Bibles International. BI says that the Versluises’ “passion for people without Bibles (particularly in India) provided great impetus for the fledgling organization, and much is owed to Paul and Genella for what BI is today.”

Genella was preceded in death by her husband, Paul.

She is survived by her children, Paul III and Maribeth; six grandchildren; and eight great-grandchildren.

Next post Sharing Our Faith in an Antagonistic Culture