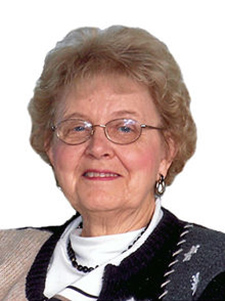 Evangeline graduated from North Park University and Drake University. She served alongside her husband, Wayne, as he was pastor of three churches, including First Baptist Church, Monroe, Iowa, and Newhall Baptist Church, Wyoming, Mich.

Friends remember “Vangie” as a “gracious, talented, loving lady” who played the organ for church services and led the choir.

In addition to her role as pastor’s wife, she was a public school teacher and worked for Bibles International as secretary to Founding Director Paul Versluis, Director Fred Carlson, and Language and Literacy Consultant Henry Osborn.

She is survived by her children, Becky Schnuckel, Kristine Holman, and Joseph; eight grandchildren; and three great-grandchildren.

A funeral service will be Saturday, May 3, at 11 a.m., at Cook Memorial Chapel (East Building), Grandville, Mich.