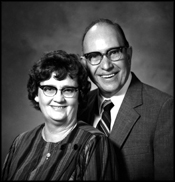 C. Raymond Buck, a pastor and missionary who served as president of Baptist Mid-Missions, died on February 29. He suffered a serious stroke on January 26 from which he never recovered; he was 83.

Raymond Buck was born into a rural Kansas home on September 11, 1924, and trusted Christ as Savior in church—on the same day that his parents received Christ. As a youth, Raymond was active in Scouting and reached the Eagle rank with two Palms, which required hard work, faithfulness, and leadership. He graduated from Wichita High School in 1942 and began to attend Wichita State University under a scholarship, until his army reserve unit was activated in 1943 during the height of World War II.

Articles by Dr. Buck
• How I Came to Christ
• “The Serpent of our Society”
• “Well-Come Pretty Mother!”
In March 1943, as Raymond was about to head off to boot camp, he responded to God’s call during church meetings where the blind evangelist Dr. Walter Kallenbach was preaching. The deacons of the First Baptist Church of Wichita, Kansas, learning of Raymond’s decision, examined the young man and issued him a license for the gospel ministry on April 7, 1943. Two days later Raymond reported to Fort Leavenworth, Kansas, to answer his country’s summons for military service. However, his military career was short-lived. In God’s providence, Raymond contracted pneumonia and was honorably discharged, freeing him to pursue the ministry full time. He subsequently entered Ottawa University.

His first ministerial appointment came as an intern at North Baptist Church of Ottawa, a position he held for nine months. He worked under a seasoned senior pastor who provided the young preacher with helpful mentoring. In June 1944, Raymond took his first pastorate, at First Baptist Church, Waverly, Kansas. His home church at Wichita heard that young Raymond was actively involved in pastoral work and issued a call for a council of ordination to examine him and set him apart for the ministry. He graduated with honors from Ottawa with an AB in 1945, the year Raymond also married his lifelong ministry companion, Catherine Berrey, of Bonner Springs, Kansas. The union was blessed with more than sixty-three years of marriage and four children.

Also during 1945, Raymond resigned from the church at Waverly and headed to Louisville, Kentucky, to enroll in Southern Baptist Theological Seminary. During his student years in Kentucky, he became the part-time pastor of two churches, making a 185-mile trip each week to minister.

He chose to return to Bonner Springs, Kansas after the church where Catherine’s parents attended issued him a unanimous call to become its pastor. Then known as The Baptist Church in the Country, this new ministry provided him an opportunity to try his hand at radio broadcasting. The church was heavily committed to missions, eventually giving 50 percent of its budget to world evangelism. Just after Raymond and Catherine left in 1950, the church changed its name to Bonner Springs Baptist Church (affiliating with the GARBC in 1960).

In 1950, Raymond became pastor of First Baptist Church of Atchison, Kansas. The church was an active member of the Kansas Baptist Convention and the American Baptist Convention, which had just been renamed from the former Northern Baptist Convention. Raymond served as an associational moderator and a board member of the state convention. During his Atchison pastorate, he saw firsthand the problems in the ABC, especially regarding the “inclusive policy” that had been the formal position of the Convention since the 1920s. At that time the Convention decided that, as the denomination comprised orthodox men as well as liberal men, men with wide theological diversity would be permitted to serve under the auspices of the Convention’s mission boards without having to sign any doctrinal affirmations. As a conservative, Raymond saw the inconsistency of supporting a convention that tolerated liberalism within its ranks, and he withdrew from the ABC in December 1953.

In 1954, he and Catherine were commissioned by Bonner Springs Baptist Church for missionary service in French Equatorial Africa under Baptist Mid-Missions. They attended language school at Alliance Française and l’ Université de Paris à la Sorbonne, both located in Paris, France. By November 1955, the couple entered Africa. During their first term, they ministered at Bangui and Crampel, doing evangelism and church planting. At Crampel, Raymond served as the director of the Baptist Bible Institute.

While on furlough, Raymond also found time to pursue an MA in education, which he received from the University of Kansas in 1960. He returned to Africa for a second term in 1960 to what had become the Central African Republic. During this second term, Raymond became the field council chairman and began to teach in the Baptist Bible Seminary. He and Catherine headed for a second furlough in 1964. En route home, he became ill and required surgery. The illness resulted in a surgeon-recommended three-year delay stateside, during which time he accepted the pastorate of Beth-Eden Baptist Church of Wichita, Kansas. Raymond agreed to take the pulpit, provided the church committed itself to release him as soon as the doctors declared that he was well enough to return to Africa. During his second furlough, he continued his education, earning a PhD in education from the University of Kansas in 1967.

During this second extended furlough, the administration of Baptist Mid-Missions asked Dr. Buck to join the stateside administrative team rather than return to Africa. In 1969, in response to that plea, he became the northern deputation secretary, moving to Cleveland, Ohio. By 1972, additional duties were given to him, including supervision of the fields of Zaire, Chad, and the Central African Republic. The following year, he became the administrator in charge of both Africa and Europe.

Dr. Buck remained with BMM for twenty years, eventually becoming a second vice president, then a first vice president, and finally succeeding Dr. Allen E. Lewis in 1983 as the sixth president of the mission. During his administration, the mission family grew to 1,008 active career missionaries with more than 1,230 total mission family members. New fields came about, including Argentina and Ecuador, and the mission expanded its outreach into Eastern Europe. The mission moved into new headquarters in Middleburg Heights, giving it increased space to facilitate its worldwide outreach. Dr. Buck also led Baptist Mid-Missions in establishing the Take Charge program, which challenged the mission’s 5,000-strong church support base to “take full charge of their church missionary programs,” freeing the home office to serve the missionaries better.

During his administrative days, Dr. Buck was active in preaching in churches at home and abroad, representing the mission, and promoting the cause of the gospel. He visited numerous international fields where BMM missionaries were serving and promoted missions among the General Association of Regular Baptist Churches, speaking at the national conferences in 1970, 1979, and 1986. He also visited colleges and seminaries in the United States, sometimes serving as adjunct professor of missions.

As Raymond approached his retirement from Baptist Mid-Missions in 1989, Dr. Ernest D. Pickering, president of Central Baptist Theological Seminary, Minneapolis, asked Raymond to join the faculty as professor and chairman of the Department of Missions. Dr. Buck spent the next decade teaching a variety of courses at Central. He also delivered the Staley Lectures at Faith Baptist Bible College, Ankeny, Iowa.

As he approached another retirement in 2000, his colleagues at the seminary, in collaboration with Bill Smallman of BMM, released Missions in a New Millennium (Grand Rapids: Kregel, 2000), affectionately known as “The Buck Book.” It was a fitting tribute to a man who had invested most of his adult life in the cause of world missions.

In his final years, Raymond was an active member of Fourth Baptist Church of Minneapolis, choosing to remain with a group of members in the downtown area of Minneapolis to start Family Baptist Church of Minneapolis when Fourth Baptist relocated to the suburbs of Plymouth. He was also called upon regularly to fill various pulpits, preaching on missions and other topics. He was a favorite chapel speaker each semester at Central Seminary and continued to participate in its annual Commencement exercises.

C. Raymond Buck was a man mightily used of God. Those who knew him will not soon forget the legacy of godliness and commitment that he left. He is survived by his wife, Catherine, and their children, Charles, Cheryl, Christina, and Richard. A memorial service has been scheduled for Friday, March 7, at 7:00 p.m., at the Berean Baptist Church, Brooklyn Park, Minnesota.