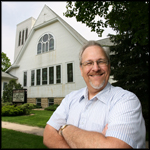 WAVERLY, Iowa—First Baptist Church of Waverly, Iowa, hosts an open house on Sunday, June 14 to mark the first anniversary of a devastating flood. The program will include tours of the remodeled basement and a narrated slide presentation showing the progress from flood to completed project.

“When this all started, it was devastating, just a mess,” says Pastor Brian Wilkins, describing the flood that filled the basement of First Baptist Church with mud and debris. “I don’t know that the pictures give the full impact of what this looked like—an absolute, atrocious mess.”

A year ago, church members worked around the clock to sandbag the church and move valuables off the floor of the basement, knowing that the Cedar Rapids River would flood. But on June 10, 2008, the flood rose to a crest of nearly 20 feet.

“The water kept rising higher, higher, and higher—considerably higher than predicted—and it ended up filling the basement of our church,” says Pastor Wilkins, who has been pastor of First Baptist for 21 years.

“Baptist Builders Club met together with me and representatives of our state association to come up with a plan that involved getting the word out to a number of churches and individuals who helped us,” Pastor Wilkins says, also crediting the Baptist Builders Club website for publicizing the church’s needs and replacing damaged Sunday School curriculum from Regular Baptist Press.

“The GARBC as a church family was a very precious and special thing to us,” says Pastor Wilkins, who estimates the church received 242 gifts, totaling more than $22,500. The entire recovery project cost $202,000.

Pastor Wilkins credits the giving of people, the prayers of people, and the ministry of Baptist Builders Club for his church’s recovery. “After the flood, we understood that this was God’s church, and God was going to do something here, and He did!” Pastor Wilkins says.