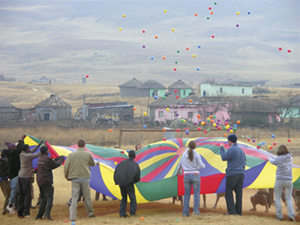 Many Baby Boomers will remember the Wayback Machine from the early 1960s cartoon television program The Rocky and Bullwinkle Show. According to the Web-based encyclopedia Wikipedia, the machine was constructed by Mr. Peabody, a professorial, bow-tie-wearing dog, to enable him to visit famous historical events. At Mr. Peabody’s request, Sherman, his assistant, would set the Wayback Machine to a historically significant time and place, and the two would be instantly transported there.

With our apologies to the proverbial Mr. Peabody, let’s set our own historical sights on the year 1944. That year began what was to become a cultural phenomenon that has impacted both secular and religious culture for decades—the development of a nationwide youth culture.

On June 6, 1944, the Allied troops launched the largest invasion force in history onto the beaches of Normandy, France. The D-Day assault continues to dominate history’s archives chronicling the year 1944. But if we track other significant influences that also occurred that year, we would have to include the construction of the world’s first digital computer, the first scientific identification of DNA, and Congress’s passing of the G.I. Bill to help returning soldiers assimilate back into American society.

Nineteen forty-four also marked the first issue of Seventeen magazine. Here’s what author Jon Savage, in Teenage: The Creation of Youth Culture, reported about the beginning of this new publication. “In September 1944, a magazine was launched that pulled together the strands of democracy, national identity, peer culture, target marketing, and youth consumerism into an irresistible package.” Savage also identified this event as a catalyst for a new way of thinking: “The increasing importance of youth demanded a new name. That America had a unique way of organizing its adolescents had already been recognized by the sociologist Talcott Parsons. In an October 1942 article . . . he coined the term ‘youth culture’ to describe the particular ‘set of patterns and behavior phenomena’ that was unique to American society.”

The mid-1940s may have been the “perfect storm” of convergence of cultural factors that led to the emergence of a new youth culture in America. The war was soon to end, and its conclusion meant a tidal wave of young people moving back into a society that was already featuring a growing generation gap of workers. Gary McIntosh writes about the generational influences in the postwar society: “The early boom of babies following World War II was at first not surprising. A rise in the birth rate after the ‘boys came home’ was expected. Within a few years however, the staggering growth of four million babies a year alerted observers that something different was taking place. One thing was certain—the babies kept coming and coming and coming.”

The development of a new kind of youth culture continued in the 1940s. “What the Depression had begun, World War II accelerated,” wrote Dean Borgman of Gordon-Conwell Theological Seminary. “Teenagers were ‘the biggest men in town.’ And they had money in a new booming economy. With this new label of teenager and money to spend, they quickly caught the merchants’ eyes, and teen magazines, music, and clothes were soon on the market,” continued Borgman.

And youth ministry was born

God’s people responded to this growing cultural influence en masse with the construction of what was to become known as youth ministry. Probably the initial strategy was the development of the youth rally as a means to reach and minister to the growing number of young people. One youth ministry expert described what was happening this way: “As the war wound down, the response
. . . increased. Thirty thousand crowded into Chicago Stadium for a ‘Victory Rally’ in the fall of 1944. Twenty thousand packed Madison Square Garden for one of Jack Wyrtzen’s ‘Word of Life’ rallies as another 10,000 people were turned away.”

Other ministry strategies to reach this growing youth phenomenon soon developed. Christian colleges created youth ministry majors; churches began to hire professional youth pastors; and Christian publishing houses wrote lessons and materials specifically for teenagers. As Gen Xers followed  Baby Boomers, and Millennials followed Gen Xers, our culture has been fascinated with youth. As illustrated in the past few decades in America, significant cultural trends always follow demographic upheavals. This happens in society as a whole, but it is true in Christian circles as well. Many of the major trends facing the church today also have their start in youth ministry. These include the seeker-sensitive movement popularized by Bill Hybels and Willow Creek Community Church and the current Emergent Church movement that started within the Youth Specialties organization.

Other cultural factors are in place today that seem to indicate that another perfect storm is developing—and with it perhaps a whole new beginning to what ministry will look like for years and years to come. As Western cultural changes followed population patterns, likewise international cultural and ministry trends will undoubtedly follow global population trends as well.

In 1944, the world’s population was somewhere near 2.5 billion people. We are now well on our way to 7 billion people. Currently there are over 1 billion teenagers in the world, and literally one-sixth of the world’s population is between 15 and 19. Due to the Internet and other means of global communication, there is now virtually one worldwide youth culture. According to writer Elissa Moses, “Teens inhabit every country on every continent. Teens . . . all speak the same dialect of global brand consumption. In many of the huge developing nations, such as China, India, and Brazil, youth under 25 dominate the population. . . . The kids in Prague are especially similar to the teens in East Germany, Russia, Brazil, Peru, China, and all other developing countries that were never a practical consideration in building a global youth target market in the past. The significant difference is that a global youth culture has now emerged.”

A new era for youth ministry

I am absolutely convinced that new and creative ministry trends will develop out of this global youth culture, similar to what happened here in the United States following the mid-1940s. I am not saying that international youth ministry will necessarily take the form it did in American Christian circles then. However, I confidently predict that many global ministry strategies will feature culturally relevant methodologies to reach a burgeoning young and rapidly growing population. It is historically accurate to say that ministry trends follow major population cycles. So it is logical to predict that youth ministry will become the next great wave of global ministry.

When we add that fact to the statistic that close to 90 percent of people around the world accept Christ before the age of 18, we begin to see just how important it is to reach young people for Christ all around the globe.

Within the next few years churches in every country on every continent will need trained, dedicated youth workers to develop relevant and innovative ministries for this expanding global youth culture. Church leaders everywhere must anticipate this trend now and seek to raise a new generation of global youth workers who are willing to serve on the front lines of this new trend in international ministry.

Ministries that effect true change must have the ability to anticipate future trends. As we look back into this onetime period in American history, we see amazing parallels to current global population trends. It only makes sense that we can predict that the next great wave of culturally relevant ministry will feature young people. If we want to change the world, we’ll need to aim young.

Mel Walker is the president and cofounder of Vision For Youth, Inc., an international network of youth workers. He consults with Regular Baptist Press on student ministries materials. He and his wife, Peggy, are the parents of three grown children, all serving in vocational ministry.